Statements by KKE Gen. Secretary Dimitris Koutsoumbas after his meeting with the President of Cyprus N.Anastasiadis 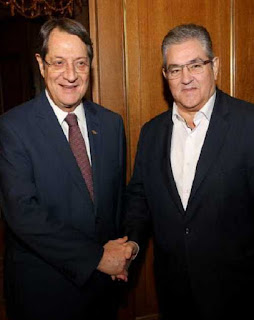 After meeting the President of the Republic of Cyprus Nikos Anastasiadis, who is visiting Athens, the General Secretary of KKE Dimitris Koutsoumbas made the following statements:

"We expressed our big concern and, at the same time, our opposition to a dichotomous, confederal solution in the Cyprus Issue which will not unify but instead will divide the Cypriot people.

At the same time, we expressed the steady positions of the KKE for a just and viable solution in the Cyprus Issue, for a unified state, which means one and not two states, a common country of Greek-Cypriots, Turkish-Cypriots, Maronites, Armenians and Latins, without foreign military bases, neither British nor others, without guarantors and protectors, with a single sovereignty, a single citizenship, a single international personality, that actually means one state.

And from this point of view we expressed our solidarity to the Cypriot people in their just but difficult struggle they give this period, in order to become finally and actually the masters in their own place.