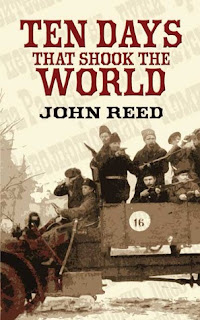 Ten Days That Shook the World.
By John Reed.
PREFACE.
This book is a slice of intensified history—history as I saw it. It does not pretend to be anything but a detailed account of the November Revolution, when the Bolsheviki, at the head of the workers and soldiers, seized the state power of Russia and placed it in the hands of the Soviets.
Naturally most of it deals with “Red Petrograd,” the capital and heart of the insurrection. But the reader must realize that what took place in Petrograd was almost exactly duplicated, with greater or lesser intensity, at different intervals of time, all over Russia.
In this book, the first of several which I am writing, I must confine myself to a chronicle of those events which I myself observed and experienced, and those supported by reliable evidence; preceded by two chapters briefly outlining the background and causes of the November Revolution. I am aware that these two chapters make difficult reading, but they are essential to an understanding of what follows.