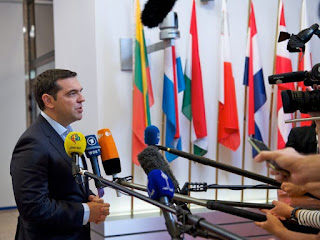 On the ocassion of the European Union Summit in Bratislava, Slovakia, the Press Office of the CC of the Communist Party of Greece (KKE) issued the following statement:

"The contrasts within the EU do not concern the peoples' rights, but the fight about how every state will protect it's own monopolies, especially under conditions when the economic capitalist crisis hasn't been overcome and the forecasts about the economy in the EU and Eurozone are even more ominous.

Besides, while they are fighting about the management mixture (policy) and the future of the EU/Eurozone, they - both social democratic and neoliberal governments - jointly crush the working-peoples' rights and co-decide the more active EU involvement in wars and interventions, within the framework of her antagonism with other imperialist centers.

That is why the effort of the SYRIZA-ANEL government to show that it works- supposedly- for the "restart" and "rectification" of the EU consists a huge mockery.

The EU isn't humanized and the way of the people is the disengagement from every "alliance of wolves" in combination with the struggle for the radical capitalist overthrow.