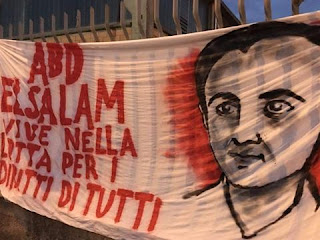 The workers testify that they heard the Chief of Staff shouting at the truck driver “Go, go!” and the driver initially refusing; then, after the Chief’s insistent order, he started driving in a narrow road in the wrong direction, at high speed. Eldanf was hit, together with other two workers, one of them injured. The police was guarding the protest, but didn’t do anything.
Eldanf – 53 years old, father of five – was born in Egypt, where he was a teacher. He had been working in the GLS plant for 14 years. He wasn’t one of the fired workers, he had a permanent contract and was also waiting for his Italian citizenship. He was there in solidarity with his comrades.
The Piacenza Prosecutor’s office established that his death was a car accident, since they deny that there was any strike or protest taking place at that moment, although police was on site to manage “public order”. The truck driver is not under arrest, nor, obviously, is the Chief of Staff who ordered to crush the picket.
Many demonstrations took place in Italy during the day to mourn the loss of Eldanf. The protesters occupied the railway in Piacenza, while in Bologna a rally was attacked by the police while they were trying to get inside the train station. Other demonstrations took place in Pavia, in Naples and in other cities. The GLS plant in Piacenza in still blocked. The FIOM union declared a solidarity strike at the Ferrari plant.

The World Federation of Trade Unions informs the international working class about the tragic homicide of its member, a USB Italy trade Unionist, Abd Elsalam Ahmed Eldanf, 53 years old and father of 5 children.

The WFTU representing currently 92 million workers in 126 countries denounces in the most profound way this murder which serves as an act of terror and manipulation against the struggles of the USB and the militant trade union movement in Italy.

At the 23.45 of September 14th, USB trade unionists was run over and killed by a truck during a strike with picket to the GLS in Piacenza.

The homicide of the comrade and brother Abd Elsalam Ahmed Eldanf is the tragic epilogue of an escalation of violence and repression of the GLS and its sub-contractor SEAM. This is the way they decided to respond to the fair claims of the workers demands.
Last night the USB was holding a meeting with the logistic workers of GLS/SEAM to discuss the missed respect of the undersigned accords on the assumptions of the precarious at determined time.

Thanks to the precariousness introduced by the laws voted by the Government of Italy and agreed with the European Union, the bosses impose labour-relationships based on violence and blackmail, so that the absence of rights has become the norm in this sector, where their profit grow up until the 29%in one year.

The WFTU stands in total solidarity with USB, its members and the working class of Italy.

PAME (All-Workers Militant Front) Condemns the Murder of the striker Abd Elsalam Ahmed Eldanf, from the company GLS/SEAM in Pacienza of Italy.
Comrade Abd Elsalam Ahmed Eldanf, from Egypt, member of the USB Italy, was picketing the strike in the company GLS/SEAM, which was taking place against precarious working conditions imposed by the company. The employers gave orders to one of the drivers to move his truck against the picket line. The truck hit and killed the striker, father of 5 children.
PAME condemns the employers, who emboldened by the support of the Italian Governments, want to impose their dominance over the bodies of the workers. The escalation of oppresion and repression will have its answer by the organized, class oriented trade union movement.
We express our class solidarity to the struggle of the workers of GLS/SEAM and USB.
We call all trade unions of Greece and Europe to massively condemn the murder of our comrade bd Elsalam Ahmed Eldanf and express their solidarity.
WE DEMAND THE IMMEDIATE PUNISHMENT OF THE MURDERERS
We strengthen solidarity! - We strengthen the fight!

The Pancyprian Federation of Labor PEO Cyprus condemns the  brutal murder of Abd Elsalam Ahmed Eldanf , an activist of USB, when he was participating in a strike picket in the company GLS/SEAM against flexible forms of employment.

Abd elsalam struggled to the end of his life against the brutality of capitalism.

We demand the immediate arrest and condemnation of those involved in this barbaric assassination.

We express our condolences to his family and our class solidarity to USB and all his comrades.

The World Federation of Teachers Unions, affiliated to WFTU, condemned the murder of Ahmed Eldanf.

Solidarity Message of The FNSTFPS / Portugal.

Solidarity Message of the NEHAWU.