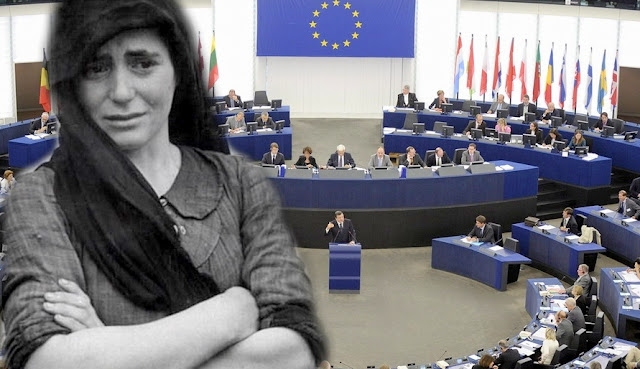 In a joint press conference held in Strasburg on Tuesday, the KKE delegation in the European Parliament and the National Union of Fighters of the National Resistance and the Democratic Army of Greece (PEAEA– DSE) denounced the decision of the Europarliament's Petitions Committee to reject, without any investigation, the report regarding the German WWII reparations towards Greece.

Sotiris Zarianopoulos (MEP) on behalf of the KKE Europarliament delegation and Christos Tsintzilonis, on behalf of PEAEA-DSE, expressed their denouncement of the decision of the Committee on Petitions, as well as the stance of the Greek government. More specifically, the SYRIZA-ANEL government declined to support the report of PEAEA-DSE thus contributing to it's rejection from the Petitions Committee. Prime Minister Alexis Tsipras himself, responding to a question at a press conference in Thessaloniki, said that the Greek government will choose the... “right time” to assert the issue of WWII German reparations. In a few words, the government tries to avoid any serious attempt in officially claiming the war reparations that Germany still owes to Greece.

As Christos Tsintzilonis said, the European Parliament Committee on Petitions decided to reject, without any further investigation, the issue of the war reparations, despite the fact that PEAEA-DSE had adduced additional evidence which vindicate the rightful demand of the Greek side. The excuse from the side of the Petition's Committee was that the issue of German war reparations does not fall within the jurisdiction of the EU and that it is a bilateral matter between Greece and Germany!

The response of the Europarliament Committee on Petitions was the following (abstract):

Subject: Petition No 2214/2014 by Christos Tsintzilonis (Greek), on behalf of the Panhellenic Union of Fighters in the Greek Resistance and of the Members of the Democratic Army of Greece (PEAEA - DSE), on the war reparations owed by the Federal Republic of Germany to Greece.

Summary of petition: The petitioner considers that, after seventy years have passed since the end of WWII, the time has come for Germany to pay war reparations to Greece :
a) for the compulsory loan of 3.5 bn US dollars (value of 1938) that was imposed on Greeks to cover the costs of the occupation forces,
b) for destruction caused by occupation forces to the country's (financial) infrastructure and to the looting of financial and natural resources,
c) for damages owed to the victims of the occupation forces and to others who were forced to provide compulsory labour in army camps and factories,
d) the return of archaeological treasures of great value that were looted by the German forces. For some of these matters Greece received small reparation sums in 1945 and 1960.
He denounces the fact that all Greek governments in the near past have so far refused to claim these reparations from Germany, in order to avoid disturbing the good relations with partner member states within the EU. They consider their claim to be fair and just and more than longstanding, as the Resistance Unions in Greece have put forward such claims already in the 1950's.

3. Commission reply, received on 30 March 2016. According to Article 5 paragraph 2 of the Treaty on European Union, "the Union shall act only within the limits of the competences conferred upon it by the Member States in the Treaties (…)". The European Commission has thus no general powers to intervene with the Member States. It can only do so if an issue of European Union law is involved. On the basis of the information provided by the petitioner, it does not appear that the matter to which he refers, namely war reparations by Germany to Greece, is related to the implementation of European Union law.

Conclusion. As the subject matter of the petition falls outside of the scope of EU competences, the Commission cannot take a position on the issue.

Despite German government's position that the WWII reparations matter has been resolved in 1990, the issue remains open. Greece is one of the countries that was most damaged by the 1941-1944 Nazi occupation; lost approximately 13% of it's population and faced severe financial meltdown (80% of industry destroyed, 30% of infrastructure destroyed). On April 6, 2015, the Greek government evaluated the war reparations to be the equivalent of 279 billion euros. However, the Greek bourgeois governments- including today's coalition government of SYRIZA-ANEL- have remained only in declarations, without proceeding to any concrete action in practically asserting the WWII reparations from Germany.

The joint press conference of KKE and PEAEA-DSE in Strasburg (in Greek).