"Today, moving towards the completion, in two years, of the 100 years of our honoured and heroic Party, we can become more capable in the promotion of our political proposal, which responds to the potentiality of a better life for the working people, on the basis of today's modern needs" Secretary Koutsoumbas pointed out, adding that this can become a reality if "the productive capabilities of the country, the natural resources, the concentrated means of production become social property, with a central scientific plan, with the active participation of the workers in the organization of social production and social services".

Among other visitors, the political event of the festival was attended by the ambassadors of Palestine, Cuba and Venezuela, as well as by the communist mayors (backed by KKE) of Patras, Petroupolis, Chaidari and Kesariani.

Below you can see some photos from the event (Source: 902.gr). 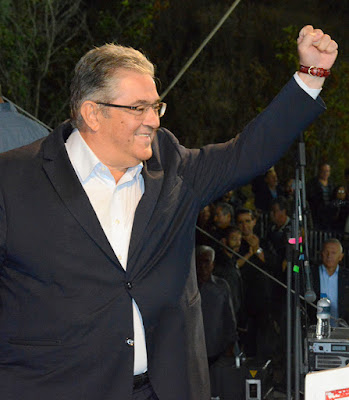