KKE General Secretary D.Koutsoumbas: "Tsipras has surpassed all limits of political deception against our people" 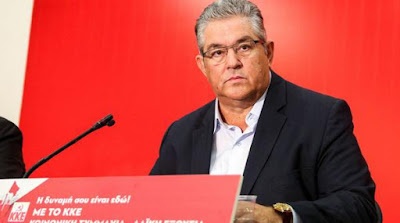 The General Secretary of the CC of the Communist Party of Greece (KKE) Dimitris Koutsoumbas visited the Thessaloniki International Fair (TIF) on Wednesday and Thursday, where he attended a press conference. The General Secretary delivered an introductory speech and then he answered to the questions of the press.

In his speech c.Koutsoumbas accused the SYRIZA-ANEL government and the EU for their antipeople policies as well as the New Democracy opposition and the other bourgeois parties. The General Secretary refered to the contemporary political and socio-economic issues, from government's attack against labour rights to various racist, anti-refugee incidents in the country.

Here are some basic parts of c.Koutsoumbas speech:

(Translated from the original by In Defense of Communism)

The new productive model that the prime minister presented to us in the TIF, the famous “road map” for "equitable development" is a very old and proven recipe: It contains exemptions to local and foreign capital, (and) literally only crumbs to the people and the youth .

Not accidentally, the criticism from other parties, as well as from several analysts, left intact the tax and other exemptions for big business. What dominated was the false questioning about the actual existence of a small revenue to cover the management of the the misery they have imposed on our people.

The truth is that he has surpassed all limits of political deception against our people in order to serve the objectives of the ruling class. He tries to hide from the people that the recovery of the capitalist economy requires more cheap labor force, increasing the degree of exploitation, new fields of profitability for the business groups, new risks regarding our country's engagement in warfare.

In fact, he calls the people to accept uncomplainingly old and new measures and wait for the miracle of "equitable development", waiting for any dropped crumbs from the table of the capital's big profits.

He (PM Tsipras) hides that the emphasis in the use of innovation and new technology to increase productivity, under capitalism, is not used to improve the position of workers. While it can objectively reduce the required working time, it is not accompanied by a general reduction in working time thus leading to part-time positions, to the deterioration of labor income. The tendency to increase the gap between wages and productivity is not just an issue of Greece, but of the EU as a whole and the other imperialist centers.

Furthermore, the congratulations that the SYRIZA-ANEL government received from the European Commission and the “institutions” about changing the image of Greece are related exactly to these directions. The relevant commissioner of the European Commission M. Thyssen expressed recently her pleasure because the present government, as well as the previous ones, managed to recude the “labor cost” and to align it with productivity. These political choices of labor income's “slaughtering”, thanks to his policies, the Prime Minister advertises as a “positive change” of Greece's image.

The promises that the people's situation will radically improved with the increase of the capital's profits and the production of new wealth are illusive and dangerous.

The monopoly groups now contribute less than 5% in annual tax revenues of the country. For annual taxes, the ship-owners pay just the fares of 2-3 days. The Tsipras government, not only didn't free the people from the austerity memorandums, not even challenged them, but instead it founded its own memorandum on the basis of the two previous ones; that is why it was voted jointly by New Democracy, PASOK and Potami.

The Prime Minister prides himself for his supposed “left” ideology, in contrast with New Democracy's neoliberalism, in which he attributes his supposed social sensitivity. This is the special tactic of deceiving the people and, of course in this he has the help of other parties and a part of the media whoch give him a “leftist” profile in order to deceive the people. The government implemented the unpopular measures of the previous government and took additional ones.

THE VIDEO OF DIMITRIS KOUTSOUMBAS' INTRODUCTORY SPEECH (IN GREEK- NO SUBTITLES):


In the following video the General Secretary of KKE answers questions by journalists (In Greek):