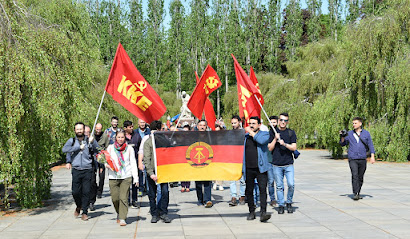 Communists in Berlin honored on Sunday the 77th anniversary of the Great Antifascist Victory of the People's despite the police ban which prohibited the use of the red flag with the sickle and hammer. As 902.gr portal reported, members and friends of the Communist Parties of Greece (KKE) and the Communist Party of Turkey (TKP) organized a joint commemoration event at Treptow Park, where the Soviet monument stands.
Treptow Park is the burial place for 7,000 heroic soldiers of the Red Army who fought for the liberation of Berlin. The joint event by KKE and TKP supporters was also a response to the recent vandalism of the monument with fascist symbols and racist slogans.
It must be noted that the local police tried to suspend the event, demanding the lowering of the KKE and TKP flags because they feature symbols related to the Soviet Union! However, the ban attempt failed and the communists continued with their commemoration event, laying flowers to the monument.
Shamelessly, the Berlin Police Directorate had announced a two-day ban of the public display of the red flag with the sickle and hammer, under the pretext of “conflict provocation” due to the ongoing war in Ukraine. This decision consists part of a greater attempt to identify and equate the Soviet Union, the Red Army and the Great Antifascist Victory with the imperialist invasion of capitalist Russia in Ukraine.