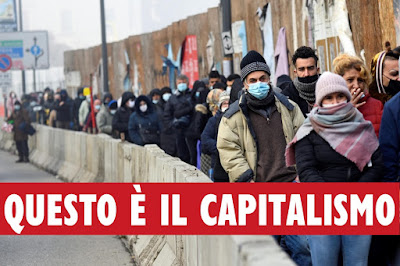 “Long queues have been forming outside food banks and help centres in Italy's financial capital Milan as the economic devastation caused by the coronavirus has deepened before Christmas.

As case numbers surged after the summer, Italy - the first European country to be struck by the pandemic and among the worst hit - has seen its stagnant economy dealt a blow by lockdowns to try to halt the spread of COVID-19.

"During this period of the pandemic, the numbers have gone up," said Luigi Rossi, vice-president of local aid group Pane Quotidiano, as a queue stretched down the block outside the centre in the south of Milan. "We certainly believe that the more this crisis goes on, the more there will be.

Even in prosperous Milan, which had been riding a major property boom before the pandemic, the crisis has bitten deeply as large parts of the economy have come to a halt”. [...]

"How can you get by?" asked Maria-Rosa Mamone, 76, who came to the centre to get food and a Christmas present for her grandchild. With three people at home and 600 euros ($700) in rent to pay every month, she is struggling. "At least I can come here. There's everything here, bread, milk..."

Unsuprisingly, in the report by Reuters there no reference to the anti-people, anti-worker policies implemented by the Italian governments under the directions of the EU. The COVID-19 pandemic is presented as the sole source of economic stagnation. This isn't true.

The outbreak of the pandemic and its consequences brought to the surface, even more sharply, the already existed social inequalities. Under the pandemic, the bankruptcy and the impasses of the exploitative capitalist system became even more visible. This is the reality in Italy and all the bourgeois governments, social democratic and right-wing ones, bear huge responsibility for the situation.
Questo è il capitalismo... This is capitalism.