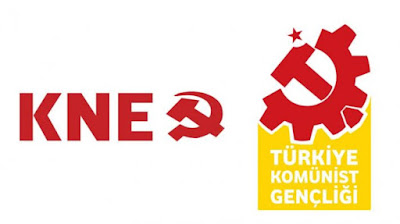 Under the slogan "Come with us in the struggle against the system which creates poverty, wars, refugees", hundreds of young people are going to participate in the 27th Anti-imperialist camp, organized by the Communist Youth of Greece (KNE).

The central political event will take place on Friday 6th July in Patras, with the General Secretary of the CC of the KKE Dimitris Koutsoumbas being the keynote speaker.

On Wednesday, March 21, the Israeli military court in Offer condemned palestinian activist Ahed Tamimi and her mother in eight months in prison and a fine of $ 1,500 each. Their conviction was based on extortion, "either you plead guilty and you stay jailed for a few months, or you plead innocent and we close your prison for 10 years."

In a statement, the Communist Youth of Greece (KNE)- the youth wing of the KKE- strongly denounces the decision of the Israeli military court. More specifically, the statement reads:
Read more »

Among other things, the statement highlights the political activity of the Communist Party of Turkey (TKP) and its youth (TKG) in universities and schools "despite the continuing surveillance of its members by security forces and the police".
Read more »

Holding banners with messages of solidarity towards the Palestinian people and red flags, numerous members and friends of the Communist Youth of Greece (KNE) participated yesterday in a protest outside the embassy of Israel in Athens.
With slogans such as "Freedom to Palestine", "People aren't terrorists, Israelis out of Gaza" and "Solidarity with the struggle of  the people, down with the capitalists' authority", the demonstrators gathered outside the embassy and condemned the continuous crime of USA-NATO-Israel against the people of Palestine, the hypocritical stance of the EU which actually equates the victim with the perpetrator, as well as the recent decision by the US government to recognize Jerusalem as "Israel's capital".
Read more » 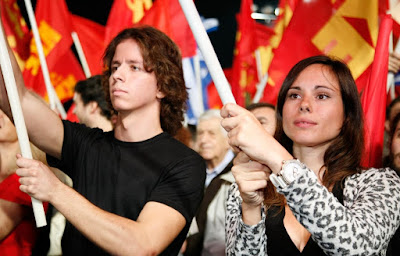 The 50-year course of KNE is the youthful storming of the future,
for the new world, socialism-communism