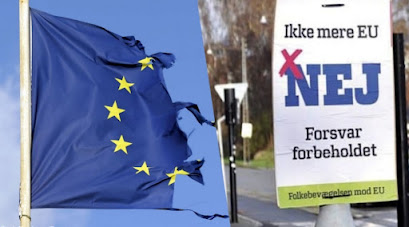 “Tonight Denmark has sent a very important signal. To our allies in Europe and NATO and to Putin”, Prime Minister Mette Frederiksen declared echoing the aspirations of the Danish bourgeois class. “Denmark now can partake in the European cooperation on defense and security. And for that I’m very, very happy”, the Prime Minister added.
“NATO will of course remain our most important tool, but the EU gives us another in securing our defense in the east” the ruling Social Democrats’ defense spokesperson, Mogens Jensen, said.

Participation in the EU's defense police will allow Denmark, which is a founding NATO member, to take part in EU imperialist missions abroad, including those in Bosnia, Somalia and Mali, thus paving the way for Danish capital to upgrade its presence in the imperialist political stage.

The high percentage of approval for government's proposal can be explained mainly a result of a campaign of fear that was launched by the mass media following the Russian invasion in Ukraine.

Communists stand up against NATO and EU

Despite the unfavorable conditions, the communists of Denmark stood up against the country's participation in EU military policy and NATO. In a statement prior to the referendum, the Danish Communist Party (DKP) reaffirmed its solid opposition to NATO and the EU, expressing the position that the country must leave these two imperialist organizations. The DKP urged the working class to vote “NO” in the referendum and proclaimed: “No American bases on Danish soil. No weapons to Ukraine. No Danish troops in the Baltics. Denmark out of NATO”.

Commenting on the referendum's outcome, the Communist Party in Denmark (Kommunistisk Parti), which also supported a No vote, points out that it was the fear and insecurity of war that led to the victory of Yes. Despite the approval of the government's proposal in the referendum, the voice of those who are against the EU cannot pass unnoticed by the political establishment. The question now, the Communist Party adds, is how the existing opposition and skepticism to the EU can manifest itself and create new roots and wings in the years to come”.

From its side, Denmark's Communist Youth (DKU) underlined that the pro-governmental campaign choosed to play with the people's feelings and fear of an escalation of the Ukraine war, in order to convince that Denmark is in danger and only the EU can protect the country.

The DKU condemned the hypocrisy of Denmark's political elite and stressed out that the policy of the government serves the interests of the bourgeois class. “If the referendum ends with a Yes, it will mean that the imperialist actions committed by Danish troops in other countries can be said to have a democratic basis”, the Communist Youth adds. A No vote wouldn't mean the end of the fight against Danish imperialism, but it would be one positive step in the long struggle for the ultimate defeat of imperialism.