G. Marinos (KKE): The joint struggle of the communists against NATO and the imperialist war 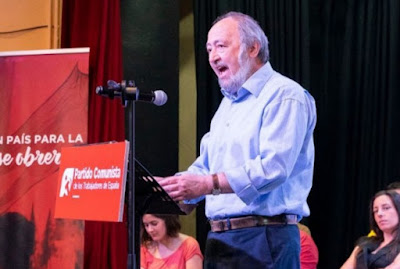 Following an invitation of the Communist Party of the Workers of Spain, the KKE and the Communist Party of Turkey attended an event in Madrid on the occasion of the NATO Summit that will take place in Madrid in June 2022, under the tile “Your wars, our dead – no to the imperialist war”. Giorgos Marinos, member of the PB of the CC of the KKE, delivered a speech on behalf of the KKE, which reads as follows:

We would like to thank you for the opportunity given to the KKE to participate in today’s event, which is organized by the CP of the Workers of Spain on the 40th anniversary of the accession of Spain to NATO, and to shout out loud our will to strengthen the joint struggle against bourgeois classes, against NATO and all imperialist alliances, against imperialist wars and interventions.
Recently, our Party held multifaceted events about the 70th anniversary of the accession of Greece to NATO and, together with the CP of Turkey, we highlighted the painful consequences of the course of our countries in the NATO alliance since 1952 for our peoples.

The establishment of NATO in 1949 was a strategic choice of the USA and their European allies to shield the capitalist system after the Second World War, aiming to:

— Damage the Soviet Union and socialism, which was a decisive factor in the Victory over Nazism.
— Pave the way for the US and EU monopolies to open new fields of profitability.
— Strike a blow to the workers’–people’s struggle.

For more than 7 decades, NATO has been confirming its aggressive role and its mission as the long arm of Euro-Atlantic imperialism used against the peoples, having their blood on its hands.

It has led imperialist wars and interventions; it has been behind coups and military juntas; it has been a vehicle of anti-communism and an opponent of social progress. All these cannot be whitewashed by the bourgeois propaganda that spends millions of dollars to embellish the repulsive face of this murderous mechanism.

The various mouthpieces of social democracy and opportunism who supported that NATO would dissolve following the counter-revolution and the break of the Warsaw Pact —which stood at the peoples’ side from 1955 to 1990— were exposed. The positions of the communists and the consistent revolutionary forces supporting that the Euro-Atlantic alliance would continue its dangerous path and adapt to the new needs of the anti-popular plans and imperialist competition among the USA-its European allies, Russia, China, and their alliances were confirmed.

That is what we are experiencing all these past years. NATO is becoming more aggressive, increasing its member states, realigning its forces and enlarging. Under pretexts such as ‘combating terrorism’, ‘ensuring security’, and ‘controlling weapons of mass destruction’, it played a leading role in the wars in Afghanistan, Iraq, Syria, and Libya causing thousands of casualties and millions of refugees and immigrants.

It proceeded to the encirclement of Russia in a planned manner. Together with the EU, it is responsible for the invasion of Ukraine in 2014 and the imposition of a pro-Atlantic government to detach the country from Russia’s influence, supporting fascist forces in a multifaceted way.

Throughout this course, there was a sharpening of the competition with the Russian bourgeoisie, which is promoting its own plans for the capitalist unification of the former USSR states.

The unacceptable Russian invasion of Ukraine and the war between the USA-NATO-the EU and Russia express the interests of the bourgeois classes for the control of the wealth-producing resources and energy pipes, for the strategic geographical position of Ukraine.

Imperialism is not only a reactionary foreign policy; it is monopoly capitalism, the decayed exploitative system. The character of the war in Ukraine is imperialist on both sides. It is a war between two thieves. We have made our choices; we stand on the peoples’ side, for their rights and needs, until the final victory, the construction of the new, socialist society.

The intervention in the developments through the Joint Statement signed by 42 Communist Parties and 30 Communist Youth Organizations under the initiative of the CP of the Workers of Spain, the CP of Turkey, the CP of Mexico, and the KKE is very important. It highlights our potential and the importance of joint struggle.

The CPs that believe in the just cause of the working class and the independent ideological-political struggle and fight for the overthrow of capitalist barbarity have one and only choice: to oppose the bourgeoisie, its state and governments; to clash with both imperialist camps. Any other choice is sliding into compromise with the peoples’ exploiters, either by supporting Euro-Atlanticism in the name of defending Ukraine or by supporting Russia in the name of the so-called anti-fascism of the Russian leadership, which played its own part in the restoration of capitalism, slanders socialism, and resorts to anti-communism.

There is no excuse. The struggle against fascism is directly linked with the struggle against capitalism that gives rise to it. It is waged against the exploiters who utilize the fascist forces of each country as a tool of the system. It cannot be waged by hailing the bourgeoisie and its state as a saviour of the peoples. That is a serious mistake, which comes into conflict with the principles of our world view.

We are vigilant. In our struggle, we take well into consideration the increasing danger of a generalization of the imperialist war. This also stems from the expansion of the Russian troops in Ukraine; the military and economic support for the Ukrainian government by the USA, NATO, and the EU; the nuclear arsenal alert on both sides; the utilization of modern weapon systems; the strengthening of the arms race; the accession of Sweden and Finland to NATO amid contradictions and intense reactions on Russia’s part.

The resolutions being prepared in the Summit in Madrid in the context of the ‘NATO 2030 and 2040 Strategy’, the overall readjustment of NATO’s objectives, the improvement of infrastructure, and the realignment of military forces, which sum up the military experience of all those years and the needs of the imperialist competition with Russia and China over supremacy in the imperialist system, constitute the spearhead of the escalation of NATO’s aggression.

This Summit expedites the procedures for the expansion of NATO’s alliance all around the globe, as demonstrated by the Conference in the Ramstein US base in Germany. Apart from the 30 NATO member states, Sweden and Finland also attended the Conference. Japan, South Korea, Australia, New Zealand, Israel, Qatar, Jordan, Kenya, Liberia, Morocco, and Tunisia also took part in it.

This plan coincides with the activities of other local and regional NATO formations all over the world. It is directed towards ‘Global NATO’, is open to new members, increases joint exercises, promotes new armament programmes, strengthens the obligations of member or cooperating states, and deepens the involvement in military operations.

The EU strategy, which cooperates and competes with NATO for the division of the looting from imperialist wars and interventions, is equally dangerous. The EU ‘Common Security and Defence Policy’ is marked by the European Army and the totality of the offensive military mechanisms that are reinforced by the so-called Strategic Compass for the deployment of imperialist missions around the world.

We are closely monitoring the developments in the Indo-Pacific, the deployment of US troops in the region, the establishment of AUKUS (the agreement between Australia, the UK, and the US), the tensions in Taiwan, the agreement between China and the Solomon Islands followed by the reactions on behalf of the USA. The developments in the Middle East, North Africa, the Persian Gulf, the Balkans, and the Eastern Mediterranean are also highly dangerous.

All in all, the competition for the division of markers, energy and wealth-producing resources, and natural gas pipelines prepare the ground for new imperialist wars.

The peoples suffer and pay a high price for both the imperialist war and the imperialist ‘peace’ that leads to it. The dramatic situation caused by the exploitation of the working class in the workplaces and the taxation of the popular households is aggravated by the huge expenditure for military equipment and the provision of 2% of the GDP for the offensive needs of NATO.

The KKE clashes with the anti-popular policy of the ND government and the social democratic parties of PASOK and SYRIZA, which are complicit in the participation in imperialist missions abroad, the military bases, and the transformation of Greece into a US-NATO launching pad for war.

Our Party is leading the struggle against the imperialist war and the country’s involvement, for the disengagement from NATO and the EU with the people in power.

Great struggles are being waged against the transfer of equipment and military forces to Ukraine and neighbouring countries, for the closure of US-NATO bases that are proliferating owing to the new Greece-US agreement recently adopted by the government in the parliament.

This struggle is combined with the struggle against the unbearable high prices of food, electricity, fuel, and rents, as well as energy poverty. The workers demand substantial rises in salaries and pensions.

As NATO member states that maintain US bases in their territory, Spain, Turkey, and Greece turn against other peoples and become a target for retaliation. Our joint struggle for the disengagement of this murderous web is of utmost importance.

With the communists’ effort, our peoples can draw concrete conclusions. They can heavily criticize and condemn the governments and parties that serve the interests of the bourgeoisie.

Many governments of various hues have ruled our country; however, the NATO membership and the involvement in imperialist plans remain, no matter which party, liberal or social democratic, is in government. The role of social democracy in Spain, Turkey, and Greece as a protector of the power of capital and a supporter of imperialist unions is well known. The myth about so-called progressive forces has been dispelled in practice. The bourgeois parties follow the same strategy; they are opponents of the peoples and managers of this barbaric capitalist system.

Our Parties consistently struggle for its overthrow, the building of the new socialist society, the disengagement from imperialist alliances, and the formation of conditions for mutually beneficial relations among the peoples.

We continue our struggle and will meet again in Madrid in late June, at the popular demonstrations against the NATO Summit". 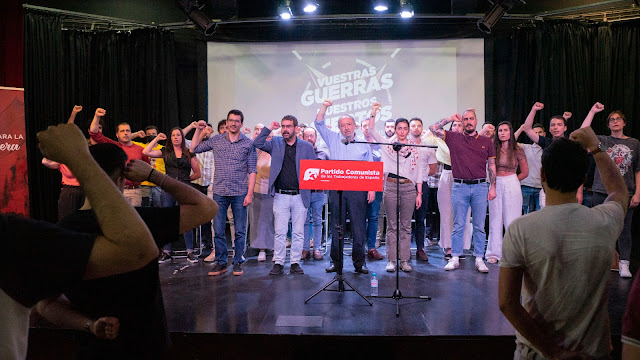