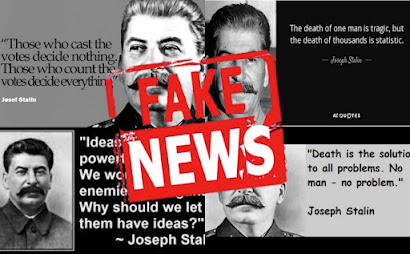 Within this context, dozens of quotes have been deliberately misattributed to Koba in an effort to spread confusion. Some of the most common are the following:

— “The death of one man is a tragedy, the death of millions is a statistic.”

This quote has been misattributed to Joseph Stalin in order to present him as a cruel, cold-blooded monster. But Stalin never ever said this phrase. The quote had been attributed to the Soviet leader by an anti-communist “dissident” and historian, Anton Antonov-Ovseyenko, in “The Time of Stalin: Portrait of Tyranny”, Harper and Row, 1981. Allegedly, Stalin said this phrase during the 1943 Tehran conference.

The quote may orginate either from: "Französischer Witz" (1925) by Kurt Tucholsky or by the concluding words of chapter 8 of the 1956 novel The Black Obelisk by Erich Maria Remarque.

Simon Wiesenthal attributes the quote to the unpublished auto-biography of Adolf Eichmann. According to Wiesenthal, Eichmann had been asked by another member of the Reich Main Security Office during WWII what they should answer would they be questioned after the war about the millions of dead Jews they were responsible for, to which Eichmann according to his own testimony had replied with the quote (Der Prozeß documentary, 1983).

This quote has been circulated throughout the internet and has been attributed to Joseph Stalin. He never said these words. There is no evidence whatsoever that this phrase belongs to Stalin.

— “Ideas are more powerful than guns. We would not let our enemies have guns, why should we let them have ideas?”

You may find this quote attributed to Joseph Stalin in various images and social media posts. The former US Senator Robert Torricelli has included this quote, allegedly said by Stalin, in the book “Quotations for Public Speakers: A Historical, Literary and Political Anthology (2001). However, Torricelli doesn't provide any single source for the quote. There is no credible evidence that the phrase belongs to Stalin.

— “Death solves all problems — no man, no problem”

No, the quote doesn't belong to Joseph Stalin. Anti-stalinist novelist Anatoly Rybakov had included this phrase, allegedly said by Stalin, in his book “Children of the Arbat” (1987). However, later Rybakov admitted that the quote was a fabrication and he had no sources for the statement.

— “There are no indispensable people”

Did Joseph Stalin say such a thing? The answer is No. The phrase has been wrongly attributed to Stalin in the play “Frontline” (1942) by playwright Alexander Korneychuck. According to some sources, the phrase belongs to French politicin Joseph Le Bon (1765-1795).