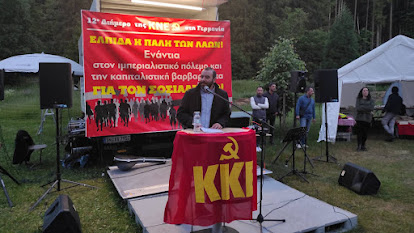 The event began with the reading of anti-war poems by Giannis Ritsos, Nazim Hikmet and Bertolt Brecht. A greeting message was delivered by Alexandros Matsigkos, Secretary of the KNE Sectoral Organization in Central Europe, who stressed out that the two-day camp is the culmination of the recent activity of the KNE organizations in Germany and thanked the foreign delegations for their important contribution.
Greeting messages were also delivered by Selma Kleinau, representing the Socialist German Workers Youth (SDAJ), and Onur Aslan on behalf of the Communist Youth of Turkey (TKG). The keynote speech was delivered by the General Secretary of the Central Council of KNE Nikos Abatielos, who concluded with the words of heroic German communist leader Ernst Thalmann from the “Lessons of the Hamburg Uprising”: 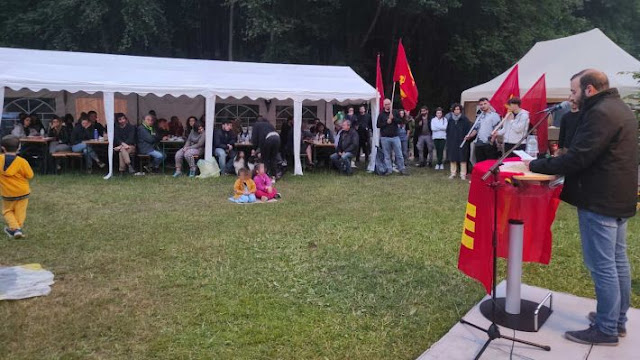 “The seizure of power by the proletariat is not a one-act play. It consists not only in military struggle against the troops of the bourgeois class, but it must be prepared with years of persistent work by the Communist Party and the entire proletariat. The future winners over the bourgeoisie must be educated, prepared and organized through innumerable partial struggles. This our main task in this period”.

The 12th two-day camp of KNE in Germany included numerous activities such as political discussions, book presentations, sports activities and visits to memorials such as the Buchenwald concentration camp.