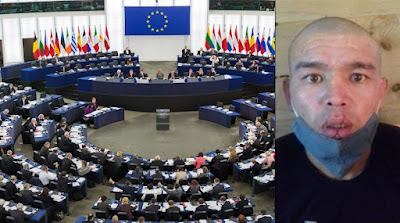 With a written question submitted to the EU Foreign Policy High Commissioner Josep Borrell, the European Parliament Group of the Communist Party of Greece (KKE) demands the immediate release of political prisoner Yerzhan Yelshibayev who remains detained by the Kazakh authorities.
It is reminded that a similar question, on the same issue, had been submitted by the KKE on September 2020.
As 902.gr portal reported, KKE MEP Kostas Papapadakis points out among other things: “Under various pretexts and excuses, the Kazakh authorities deny the early and conditional release of the leader of the unemployed movement of the Kazakh city of Zhanaozen,  Yerzhan Yelshibayev, who is serving a prison sentence following his conviction in October 2019. This is a violation of the country's law which provides the release from prison after serving a certain period of time”.

MEP Papadakis continues: “As a protest Yerzan Yeltsibayev has twice declared a hunger strike and sewed his mouth shut. The prison administration and the judicial authorities are doing everything possible to keep him in custody, fabricating various “violations” to prevent his release from prison. Yerzan Yeltsibayev has been recognized as a political prisoner by human rights organizations and has repeatedly been referred in the European Parliament resolutions as an example of violation of rights and freedoms in Kazakhstan. Today, we consider that there is a serious threat for the life and health of Yerzan Yeltsibayev”.

The KKE MEP question is the following:

What is the position of the Vice-President / High Representative of the EU on the:

— Calls by trade unions and large organisations, both in Kazakhstan and throughout the world, for the immediate release of political prisoner  Yerzan Yeltsibayev?

— Calls to stop political and trade union persecution by the Kazakhstan government and authorities?