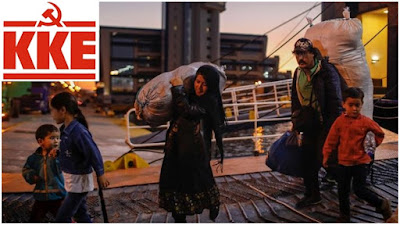 The KKE once again denounces the EU-Turkey agreement which was signed by the previous Greek government of SYRIZA and is implemented by the current conservative ND government and underlines the signifant shortages in refugee camps, such as healthcare staff. The Party's statement reminds the tragic death of a 9-months old infant in Moria camp due to dehydration and underlines that "the majority of the refugee children still have no access to education".

In its statement, the KKE calls the mass-workers' movement to give an answer to the government's unacceptable anti-people measures and call for the strengthening of solidarity and struggle so that:

All hotspots must be closed down, no to the construction of any new camp-prison.

Asylum seekers must firstly be transferred to the mainland, to public, open and decent places of accomondation and then to the countries of their destination. The problem of family reunification and transfer to other EU Member States must be resolved now and measures must be taken for the unaccompanied minors.

People coming from countries where imperialist or civil wars are being conducted and countries under imperialist occupation, as well as victims of reactionary regimes must be given asylum.

Full and free healthcare and vaccinations must be ensured for all refugees, asylum seekers and immigrants.

Full staffing of all services dealing with refugees, asylum seekers and immigrants.