On the occasion of the Polytechnic uprsing anniversary, a statement by the Central Committee of the Communist Party of Greece (KKE) points out that "the slogans of the Polytechnic remain timely in the struggle aganst the policy that leads the people to poverty, unemployment, insecurity, against the implication of Greece in the imperialist plans of NATO-USA-EU, against repression and authoritarianism".


The KKE underlines that "the imposition of the military dictatorship in 1967 served "with fire and sword" the interests of the bourgeoisie against the people. It implemented the plans of the USA-NATO imperialists, culminating with the coup d'etat in Cyprus that led to the Turkish invasion and occupation. It is proved that the character of the bourgeois power as the dictatorship of the capital takes various shapes in order to serve its interests. That was the form of the dictatorship throughout the seven years period 1967-1974".

According to the Communist Party, the slogans "USA OUT, NATO OUT", which were written in the gates of the Polytechnic, become even more timely since Greece participates actively in the USA-NATO plans and becomes a base of wars and interventions. 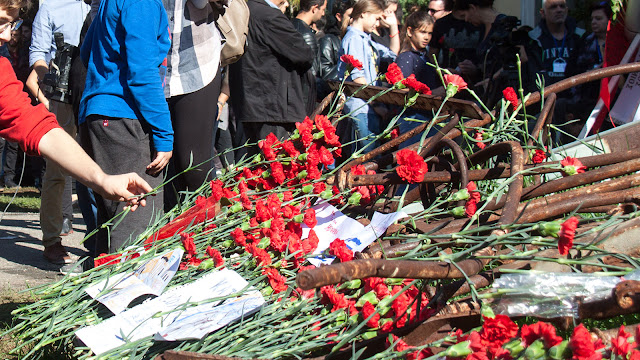 The KKE statement denounces the policy of both the previous and the current government - of social democratic SYRIZA and conservative New Democracy respectively - and calls the working class, the youth, the popular strata to participate in this year's commemoration events.

Earlier today, members of the Communist Youth (KNE) placed a huge banner at the facade of the Polytechnic School, at the Aristotle University of Thessaloniki, honoring the uprising anniversary. The banner was reading "No submission to the dictatorship of the capital". A demonstration in honor of the 1973 students' uprising has been scheduled to take place in Thessaloniki on Sunday afternoon.

The November 1973 Polytechnic uprising marks a milestone in Greece's modern history, representing the uncompromising struggle of the youth against the then military Junta. On November 17, 1973, following orders by the Junta's leadership, a tank burst through the gates of the Polytechnic killing dozens of people.