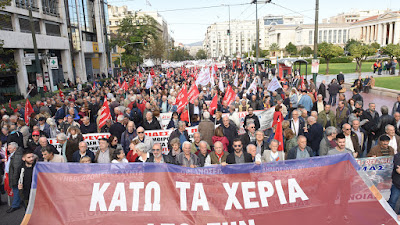 
The demonstrators gathered at Propylea and marched towards the Parliament, giving a militant response against the plans of further privatization of social security that the ND government is planning. The plans of Mitsotakis' government are based on the overall framework of anti-social security policy that both the previous and the current government, SYRIZA and New Democracy respectively, have formed.

The rally was attended by trade unionists from France, headed by Olivier Mateu, General Secretary of UD CGT 13 Bouches De Rhone (Marseille), who delivered a greeting solidarity message to the protesters. 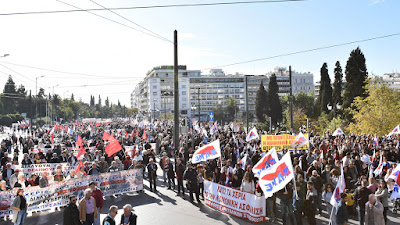 In a statement to reporters, the General Secretary of the CC of the Communist Party of Greece (KKE) Dimitris Koutsoumbas pointed out:

"Our people must show no tolerance to the plans of the government, EU and capital. Social Security, Welfare, Health, Education are not a personal matter. They are social rights. That's why the militant mobilizations must be strengthened more, everywhere. In every labour place, school, university faculty, in every city and village of our country, alarm must be sound".

Similar militant rallies took place in Thessaloniki and other big cities and towns across Greece.