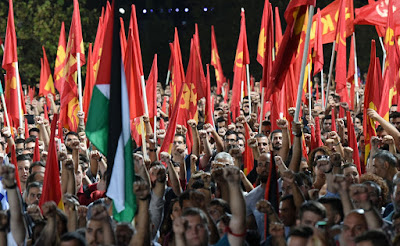 In a statement, the Communist Youth of Greece (KNE) - the youth wing of the KKE- expresses its full solidarity with the people and youth of Venezuela, condemns the imperialist interference in the country and calls for protests on Tuesday 5 February in Athens and Thessaloniki.

Under the slogan "Solidarity with the people of Venezuela! No submission to imperialism, the people are the only superpower", KNE calls young men and women to condemn the blatant intervention of the USA, the EU and their allied governments in Venezuela.

The Communist Youth also denounces the hypocritical stance of the SYRIZA government which "does not say a word thus acquiting the intervention of the imperialists in Venezuela's internal affairs". At the same time- KNE points out- the government of SYRIZA has been the best standard-bearer of the US policy in the region by promoting their plans and opening new NATO military bases.

KNE highlights also the hypocrisy of the bourgeois political parties in Greece (such as New Demoracy) which, under the mantle of "philanthropy", support the imperialist intervention in Venezuela.

The Communist Youth of Greece says: "The imperialists who have slaughtered so many people in all over the world have no right to lecture about "democracy" and "human rights". The only responsible to determine the developments in Venezuela are the country's people who can impose their rights through their struggle!".

KNE expresses its solidarity with the Communist Youth of Venezuela and the Communist Party (PCV) which are at the forefront of the struggle for the rights of the youth and the working class.