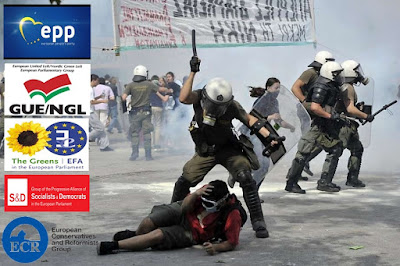 Not only do they not conflict with each other, but each supplements the other in how reactionary they really are. Both swear by EU "values" and its "Charter of Rights". The first one reminds us that on the basis of the "charter", freedom of assembly and speech "are subject to restrictions prescribed by law and necessary in a democratic society for the interests of national security, territorial integrity and public order". The second emphasizes that "restrictions on fundamental rights must respect the principles of legality, necessity and proportionality".

Both using the exact same words condemn "the disproportionate interventions of state authorities during demonstrations and peaceful protests". They urge "Member States not to use excessive force against peaceful protesters". The first, the "conservative" one, stresses that the EU Treaties require respect for the "competence of the Member States to maintain order and security". The other, the "progressive" one, recognizes that "the Police, which also has many victims, are operating under difficult conditions, especially because of the hostility of some protesters, but also because of their excessive workload"! Both, using the same wording, encourage "law enforcement officers of the Member States to participate actively in the training provided by the EU Police Academy (CEPOL) for the maintenance of public order."

The "conservative" one stresses that "the exercise of freedoms, given that it has duties and responsibilities, may be subject to formalities, conditions, restrictions or sanctions", the second, the "progressive" one, calls on the Member States " to ensure that the use of force by law enforcement authorities is always legal, proportionate, necessary and a last resort. " Its "progressive" differentiation lies in calling on Member States to "ensure that all weapons (ie police equipment) are independently assessed and tested before they are placed on the market"!

Both resolutions recognize the absolute right of the bourgeois state to restrict freedom of assembly, speech and expression, as a whole, the liberties of the people, in order to ensure the order and security of the capitalists, to protect their power. They unashamedly legitimize brutal police violence, authoritarianism and brutal repression of state mechanisms as long as it is "proportionate, lawful and necessary". And then they send them for classes at the EU Police College!

The KKE is vehemently opposed to police violence, state repression, on the whole, against the people. It does not accept the categorization, "legitimacy" and "necessity"; it does not "whitewash" it; it does not accept any excuse for it. It reveals that repression is a necessary complement to the anti-people policy of the EU and all its governments, from the Macron government in France, to SYRIZA in Greece, from the center-right and center-left Spanish governments, to Orban in Hungary and the situation in Poland and Romania; repression is all one and the same.  It strikes against popular rights, it is the armed hand of the monopolies against the working people and  their rights. The bourgeois state and its governments have the power to define violence as "lawful". To judge its "proportionality" according to smashed heads, injured and even dead protesters. Whoever speaks of "legitimacy, proportionality and necessity" of state violence is arming its barbaric hand against the people and their rights so that a handful of exploiters can impose their own interests.

The deterioration of GUE's new opportunists and social democrats is not over. One could expect nothing more from a political group in which SYRIZA, whose government in Greece has made a spectacular display of repression, holds a prominent place, unleashing brutal police violence by violently suppressing the demonstrations of pensioners, students in front of the Truman statue, teachers, persecution and "agrarian courts" against the struggling farmers of the blockades.

The resolutions of the "neoliberal" and "progressive alliance" demonstrate their strategic involvement in defending bourgeois power, the capitalist path of development. The so-called "front of progress," to which SYRIZA belongs, is on the same side as "conservatism," against the working people.

Every person who identifies as a leftist, progressive, every radical, militant, who at any point was on the streets demonstrating for the people's rights can draw conclusions about the role of opportunists, new social democrats, especially SYRIZA, of the invaluable services they provide to stabilize and maintain the barbarous exploitative system, controlling the people with both the carrot and the whip.

They should join with the KKE on all fronts of the struggle, take up their place in the real people's front, the social Alliance, against the monopolies and their power.