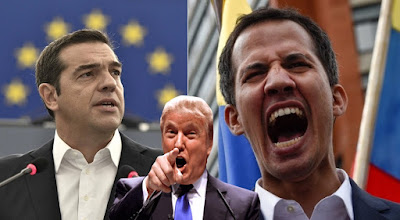 On January 27th, we were writing about the unbearable hypocrisy of Greece's SYRIZA government over the US-backed coup in Venezuela. More specifically, we were pointing out that on one hand the governmental party, SYRIZA, expresses its "full support and solidarity to the country's legal president"  while, on the other hand, Tsipras' government aligns itself with the official EU policy which is blackmailing Maduro, calling for "urgent elections" in Venezuela.

A week later, the hypocritical stance of Alexis Tsipras' social democratic government has been fully exposed. Talking to journalists in Brussels, the Alternate Minister of Foreign Affairs Giorgos Katrougalos expressed the alignment of Athens with the stance of the US-EU imperialists. He said:

"The truth is that our position not only does not diverge from the positions of the European Union, but we have co-shaped these positions, exactly because we want the European Union to be a global player, an autonomous one, with its own values of democracy, human rights and welfare state" (kathimerini.gr).

Adopting the imperialist rhetoric on Venezuela, Katrougalos said that the Greek government "respects and supports the jurisdictions of Venezuela's National Assembly and its president for the exercise of their constitutional powers, towards the conductions of elections".

The Greek Alternate Minister of Foreign Affairs expressed the same argument on his personal account on Twitter by writing: "For Venezuela, Greece supports the common position of the EU, which it co-shaped and which was repeated today by F.Mongherini! The position of the EU is for "peaceful" and "democratic" solution of the situation in Venezuela".

The question is what solution for what situation? The situation has been created by the US-backed coup of the country's reactionary, right-wing opposition. The Greek government of Tsipras has not recognized officially Juan Guaido as the president of Venezuela; however, the above statements shows that the government of SYRIZA endorses the European Union's hostile stance against Maduro and aligns itself with the US-EU imperialist policy.