Bernie Sanders: Just another "stooge" of US imperialism against Venezuela 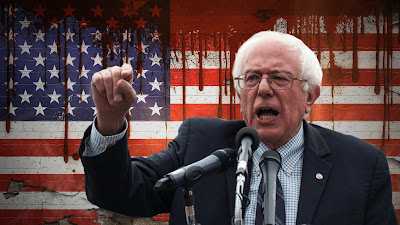 The self-described as "democratic socialist", the "good friend" of the late warmonger John McCain and praiser of criminals like George H.W. Bush, Senator Bernie Sanders has already aligned himself with the reactionary, imperialist plans of the Trump administration and the right-wing Venezuelan opposition.

"The people of Venezuela are enduring a serious humanitarian crisis. The Maduro government must put the needs of its people first, allow humanitarian aid into the country, and refrain from violence against protesters,” Sanders tweeted on Saturday.

Through this statement, Sanders clearly adopts the imperialist rhetoric and propaganda against the government of Venezuela. The references to "humanitarian crisis" and "humanitarian aid" consists the best pretext for an imperialist intervention in the country.

Senator Sanders, like others stooges of U.S. imperialism, didn't say a word about the capitalist crisis in Venezuela, the extended sabotages by opposition forces, the economic strangulation that the U.S. and other neighboring countries (Colombia, Brazil, etc) apply against Venezuela. Not even a word about the role of US-backed putschist Juan Guaido.

The remarks of Bernie Sanders created outrage on social media. "Bernie, are you f-ing kidding me! if you buy the Trump, Bolton, Abrams, Rubio line, “humanitarian intervention” and collude in the destruction of Venezuela, you cannot be credible candidate for President of the USA. Or, maybe you can, maybe you’re the perfect stooge for the 1%", wrote Pink Floyd co-founder Roger Waters on Twitter.

For those who actually know the role of social democracy, Senator Sanders stance doesn't consist a surprise at all. What is important is that the working class, the poor popular strata in the United States must understand that there are no "saviors" within the bourgeois political context. Hope must not be placed in social democratic stooges of capitalism like Sanders or Ocasio-Cortez, but in the organized struggle of the labour movement, led by a strong and ideologically credible Communist Party.

We have said it before and we will say it again: Politicians like Bernie Sanders do not deserve even the slighest trust from the working class people.