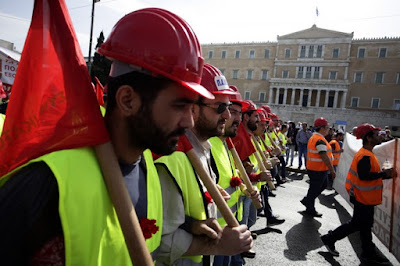 
At the same time, however, the working class was carrying the wounds and the burdens of the trade union forces of class collaboration. Forces that are the representatives of the employers and the governments within the trade union movement. Trade unionists who are themselves, employers, business executives, human resources managers, etc.

Characteristic is the example of the GSEE, the ETUC affiliate in Greece.

In 2012, the GSEE co-signed the abolition of collective bargaining and a 32% reduction in minimum wage (from 751€ they agreed to reduce the salary to 586€, while for workers under 25 years old the minimum wage was established even lower, at 511€). At the same time, it divided workers into old and young, not only with the under-minimum wage, but also by accepting flexible working relations, outsourcing, etc

But in order not to make a big report, we will only give a few examples of what they have done during the last year.

In January 2018, at the same time that the SYRIZA-ANEL government legislated against the workers’ right to strike, the GSEE leadership (social democrats and liberals and trade unionists from the party of SYRIZA which is in government) they said there was no reason to mobilize.

At the same time, dozens of trade unions in Greece made a formal complaint that a member of the GSEE General Council, who is also the Head of Public Relations Office of GSEE and the in leadership of UNI Gaming, is himself an employer. More specifically, he is the chairman and CEO of the company under the name «PIGASOS FORTUNA GAMING SA». Despite the dozens official complaints by trade unions in Greece and press reports about the issue, the GSEE leadership still maintains in its ranks a well-known capitalist.

At the same time, in an attempt to hide the huge decrease in membership it has suffered in recent years, they proceeded to provocative election fraud in a number of trade union organizations, so as to be able to present workers participation. They basically create ghost-votes, fixed elections, mechanisms to produce fake representatives. At the same time, they seeks to silence any voice that reveals the anti-workers’ tactics of the leadership and the election-fraud that is taking place. Some examples

City of PATRAS – The above mentioned capitalist – «trade unionist» of the GSEE leadership was denounced and rejected by the Regional Trade Union Center because in order to present votes for a small local trade union of the city and be elected as a representative, he traveled across Greece for 4 months and finally brought back …garbage bags with thousands of «ballots» to be counted as votes!

City of KATERINI – The chairman of the local Regional Trade Union Center decided on her own, without any right or legality, to exclude from the local congress six elected delegates who complained of irregularities in the process of electing delegates for the Regional Trade Union Congress. When, because of this, the workers in the area rose and protested by demanding a workers’ Congress clean, without false delegates, the president called on the police to keep the workers away from the Congress!!! When this plan also failed, they tried to organize “Congress Elections” in secret with the help of the local Mayor (member of the ND Liberal Party), in the basement of the City Hall. This way the Congress Elections took place by informing in secret only specific persons of the GSEE mechanism to vote.

All this, and even more, go along with the following published facts:

Only for 2018 the GSEE Education Center received state funding of …

At the same time,

GSEE receives almost half a million euros of state funding each month!

With all this money and resources at its disposal, GSEE in 2018 was preparing for 6 months a major mobilization for May 30, 2018. The result was to mobilise….92 people.

In the great strikes of COSCO dockworkers, the previous months GSEE was nowhere to be seen, non-existent, as it has disappeared altogether from the struggles of the workers of Greece.

After all this, we think are clear the reasons why GSEE refused to call for a Strike for November, despite the fact that dozens of National Workers Federations and Regional Trade Union Centers all over Greece are already fighting for its success.


This situation, with small differences, is the same across Europe. Corrupted, bureaucratic trade unions that cultivate class collaboration. They work for the bosses, not for the workers.

We are clear. We support and encourage healthy processes within the trade unions. We support and encourage the participation of workers and their efforts to control themselves their own unions, not the employers with their fraud mechanisms. Regardless of each person’s beliefs and which line each one follows in the movement – this is a matter of ideological struggle, which we want and participate in it till the end – but trade unions must to belong to the workers and they must be those who form any correlations. Not some mechanisms, aliens to the body of the working class.

This is a struggle for the workers’ trade union movement to escape from the dangerous hands of the employers and their state. We call on all workers. The outcome of this struggle concerns the entire working class.