PCUSA officially denounces factionalist and slanderous activity against the Party 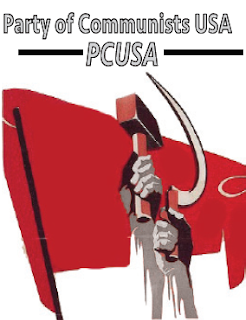 In a statement signed by its General Secretary Angelo D’Angelo, the Party of Communists, USA (PCUSA) officially denounces factionalist activity, as well as "grotesque slanders and blatant lies" against it. Read the statement below:
PCUSA has been under attack in the corporate controlled media
For those unaware of the situation, the PCUSA has recently come under attack by the anti-communist media. The government could not have done a better job.  The slander campaign was successful. However, their campaign to destroy the PCUSA was not.  For those who are unaware of the grotesque slanders and blatant lies against PCUSA, please allow us to clear the air with this statement.
A Long History of Attacks by Government Forces and anti-communist left:
Their script includes a CIA type of disinformation campaign by fabricating documents inside the Party to the media purporting to show that the Party is in disarray. Individuals began targeting the lifestyle of comrades within our Party.  Then information was deliberately leaked through the media which resulted in a cascading of disinformation reminiscent of the COINTELPRO program. The difference between the 1970’s disinformation campaign is that today our enemies use the internet and social media to quickly spread their poison. Behavior that is disruptive by anyone is not tolerated within a Leninist Party of a new type. It is inappropriate. Threats were made by one or two individuals on spreading lies and disinformation on Facebook and using email lists, and You Tube.  The individuals involved are not innocent. They knew what they were doing-to cause irreparable harm to our Party and to our class. Factionalist activities included trying to hijack our PCUSA Midwest District Facebook Page, hijacking our emails, sabotage, etc.


An emergency Committee of Inquiry was called under the auspices of the constitutionally elected 15-member Politburo to put a stop to the factional activity.  The first of the key players causing the most disruption was the first focus of the inquiry. At the inquiry comrades, including the accused, gave their version of the events in question. After deliberation the Committee voted by a vote of 9 yes 0 noes and 2 abstentions, to recommend to the Central Committee, a severe reprimand from the Party, in accordance with the party statutes. All communist parties go through a process of rectification. PCUSA is no exception.
On the Claims of us Being Anti-Women:
We in the PCUSA never have been, and never will be, anti-women. The General Secretary was the person who advocated for the creation of our Women’s Commission, we have placed women in leadership positions. All cadre, including women, are protected in our Party.
On the Claims of Misuse of Funds:
There has never been a misuse of funds in the PCUSA. Our funds are under the strict regulation and supervision of the finance committee of the Party. All income and expenditures are documented. Party funds are used for publications, flags, agitational propaganda, national events, e.g. PCUSA congresses, etc. Internet trolls have been spreading vicious lies and slanders on You tube and Facebook without providing any evidence.
Any Party member who was instrumental in providing internal Party information to outside non-Party sources knew what they were doing, and they knew it would hurt the Party. All Party members must be held responsible for their actions. What differentiates us from anarchists and Social-Democratic groups, is our reliance on structure and organization, and discipline.  Leninist discipline is what separates us from other left groups.
On the Claims of Purging the Women in Our Party:
This claim is a blatant lie. There are women members of our Party that serve on the Politburo and are active. Membership in all communist parties is voluntary. Both men and women are free to join or leave our Party at any time. No one has ever been forced out, and the perpetrators of this lie know that.
On the Claims of Violence in our Party:
No member neither in our leadership nor our rank and file has ever threatened violence against another member. Any allegation of such activity is purely delusional. There is no evidence written or otherwise. 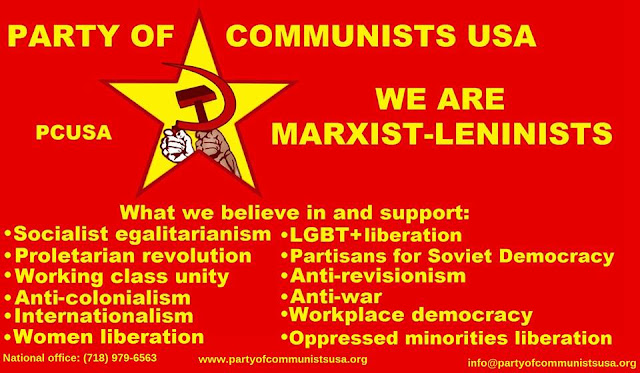 Conclusion:
The Party, despite the lies and distortions by the internet trolls and the media fueled by personal opportunism is growing and our work is continuing. Those involved in sharing or leaking internal Party information with non-Party sources must make a public retraction and engage in self-criticism to the Politburo for the erroneous inflammatory, anti-Party rhetoric. Every Party member must be held accountable for their actions. Our Party remains steadfast and united on this point.  No individual is above the collective leadership. Democratic centralism will be respected, or the members will be disciplined.
We at the PCUSA want to make clear to all, that PCUSA has a zero-tolerance policy toward factionalism; We do not engage in so-called ‘identity politics.’ We do not tolerate anti-women sentiments, anti-Trans sentiments, anti-LGBT+ sentiments, anti-religious sentiments, anti-Black sentiments or slanders of immigrants or indigenous or other nationally oppressed peoples, or any other anti- working-class sentiments, thoughts, or actions in the Party.
Discrimination and prejudice towards any sections of the working class are NEVER be tolerated in a Marxist-Leninist party. As Marxist-Leninists, we raise up all people together, regardless of race, creed, color, religion, gender identity, sexual orientation, etc. No one is left behind in the class struggle. All sectors of the working class will stand together, united against capitalism and imperialism.
Comradely yours,
Dr. Angelo D’Angelo,
General Secretary