How ungrateful are you Poland? Authorities dismantled Red Army monument in Warsaw 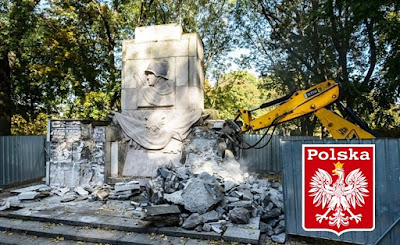 Within the framework of the hideous "decommunization" law, the reactionary right-wing government of Poland ordered the dismantling of the Monument of Gratitude to the Soldiers of the Red Army at Warsaw's Skaryszewski Park.

The Monument had been erected in 1946 in order to honor the 26 heroic Soviet soldiers who were killed there during a battle on September 1944. Throughout the years, the monument had been vandalized by various fascists and neo-Nazis.


According to Radio Poland, a part of the monument will be transfered to the anticommunist "Institute of National Remembrance" and will be added to an exhibition that promotes the antisoviet, anticommunist falsification of history.

Once again, the right-wing Polish government leads the way of EU's reactionary and unhistorical anticommunist policy which equates socialism-communism with fascism. However, even if they completely destroy all socialist monuments they cannot erase the historical truth about the pivotal role of the Soviet Union in the antifascist victory of the people against the Nazis in World War 2.

In Moscow, the first deputy head of the Russian upper house international committee Vladimir Dzhabarov told "Sputnik" that the Russian government "may impose sanctions on politicians who encourage demolition of memorials to Soviet warriors", adding that economic restrictions on Poland could also be considered.