KKE GS Koutsoumbas: NATO-USA-EU are in no way guarantors of "peace" and "security" in the Balkans 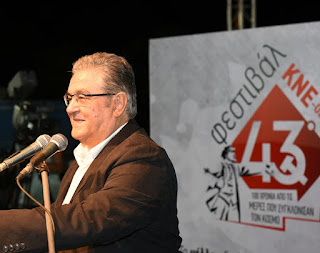 The Secretary General of the CC of the Communist Party of Greece (KKE) Dimitris Koutsoumbas spoke at a major political event of the 43rd KNE-Odigitis Festival in Thessaloniki.

The political and cultural events of the 43rd Festival of the Communist Youth of Greece (KNE) and its newspaper "Odigitis", which this year are dedicated to the 100th anniversary of the October Revolution.

The three days' of events of KNE's Festival in Thessaloniki were held from the 13th to the 16th of September. At the Festival a major political rally was held, where the GS of the CC of the KKE, Dimitris Koutsoumpas spoke and called on the youth "from tomorrow, with the impetus of the successful festival, more workers and young people should come with us on the path for revolutionary change.

All together we should struggle for the society that can satisfy our contemporary needs. A society where each of us on the basis of our capabilities can fully develop our personalities and utilize all our abilities and play a leading role in constructing this society. A society that cultivates initiative, creativity, truly innovative thinking and conscious activity, which liberates all the potential of young people which today is being suffocated by the system of exploitation and wars, capitalism. It is the society where the working class will have the power, where the working people will control the economy because they will possess its keys, and for this reason they can enjoy all the wealth that they produce with their hands and intellect, sweat and toil. The Bolsheviks 100 years ago in October 1917 gave the same response i.e. that the world changes. The new smashes the old through a revolution. This has always been the case. We call on the youth to learn, to ask about, to study the days that shook the world. To dispute the view of the exploiters, who throw mud at the revolutionary movement in Greece and internationally."

The GS of the CC of the KKE made reference in his speech to the domestic and international developments. He denounced the SYRIZA-ANEL government for the harsh anti-worker and anti-people measures it is implementing. He called on the workers to join forces with the KKE, with the labour-people's movement which has a line of rupture and confrontation with the capitalist system.

In this speech, D. Koutsoumpas, speaking from Thessaloniki, which geographically is located in the "heart" of the Balkans, made detailed reference to the developments in the Balkans, to the sharpening of the inter-imperialist contradictions in the region. Below is an extensive extract from the speech, which is related to the situation in this region and the assessments.

In particular, we want to discuss this experience today, when the confrontation, competition between the strong powers of the global capitalist world is also involving our region, the Balkans, the Aegean, the Eastern Mediterranean.

The relations of our country with the neighbouring Balkan countries, and also the Greek-Turkish relations and the Cyprus issue are entangled in this competition, in one way or another.

Here the "rope" is not simply taut, but is becoming a "knot" due to the contradictions, not only of the most powerful states, but of other smaller "links", of the plans of the region's bourgeois classes.

The multifaceted disputing of the sovereign rights and borders of Greece by the Turkish bourgeois class, and also by the bourgeois classes of other neighbouring countries, where nationalistic chauvinism is re-emerging, such as for example, in Albania, is taking place at a moment when in our wider region the war in Syria is being conducted, when the "cauldron is boiling", not only in the Middle East and North Africa, but also in Europe, in Ukraine, all along NATO's border with Russia.
This is why the decision of the SYRIZA-ANEL government to renew the U.S.-Greece mutual defense cooperation agreement is not a "routine" act but a move that entangles our country even deeper in the plans of the USA and NATO, which seek the reinforcement of the already very significant role of the naval-air-force base of Souda, a powerful "tool" in their war plans in the Mediterranean, as well as for a wider scope of operations.
At the same time, the maintenance and modernization of the base at Araxos is taking place so that it is ready to receive the transit of nuclear weapons, increasing the dangers for our people. And the government is concealing all this from the Greek people.

We call on you to be ready, to organize the struggle.

No to the bases and no to the nuclear weapons! 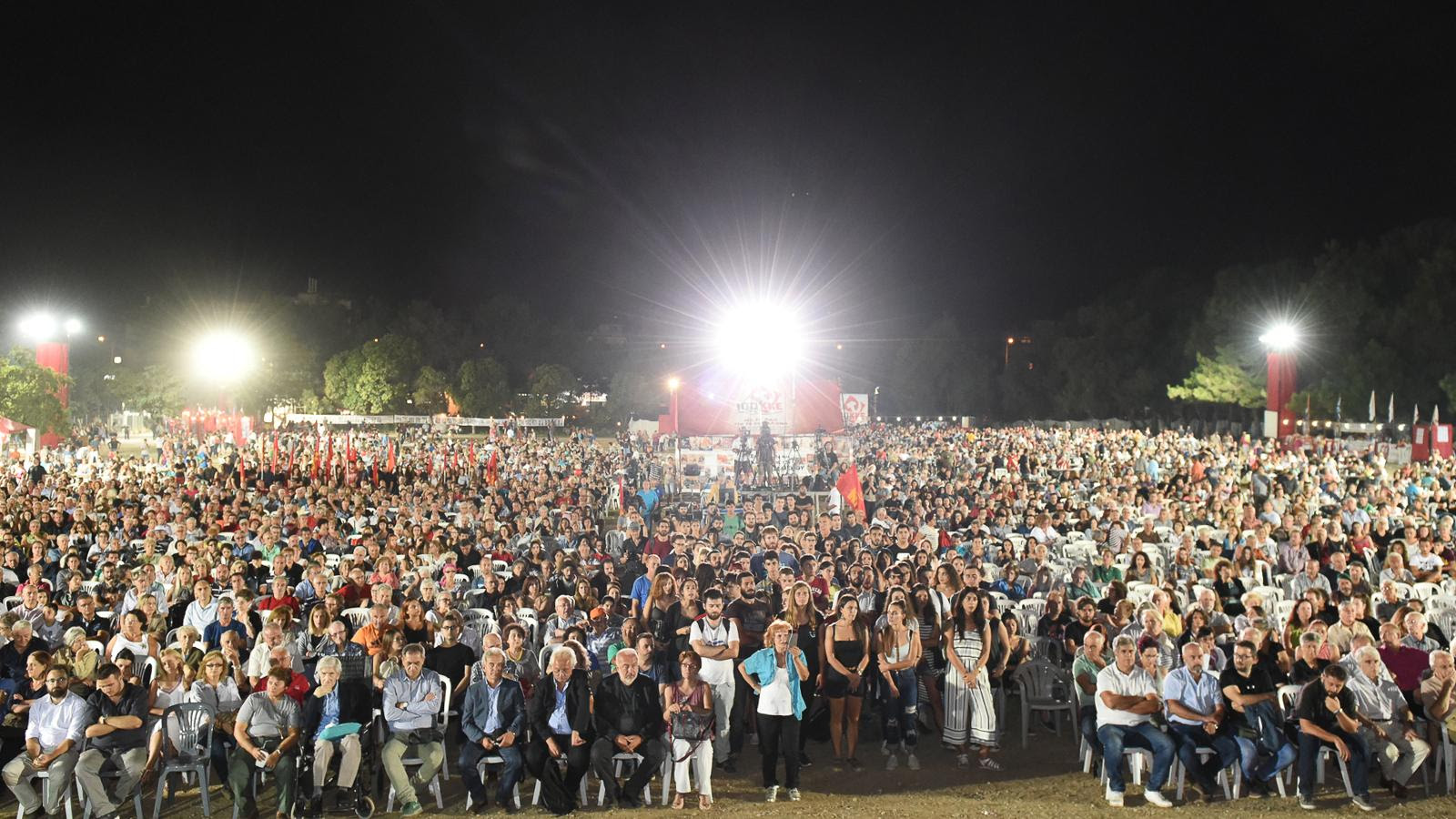 Indeed, when the US Vice President, Mike Pence, made statements in August that Russia seeks military conflict, the destabilization in the Balkans, anyone can understand why the USA is interested in reinforcing the Souda base and why the Defense Minister of the SYRIZA-ANEL is proposing to provide them with new territory for military bases and why the US ambassador in Athens is "touring" the Greek islands.

And these statements of the US Vice President which were made here, in the Balkans, in August and specifically in Montenegro, which hastily and without a referendum, as it had promised the people, entered NATO, are indicative of the intensification of the inter-imperialist contradictions in the wider region.

The SYRIZA-ANEL government completely involved in the NATO plans, sometimes invites NATO into the Aegean in the framework of the war in Syria and other times as a transit route for NATO forces, as was the case this summer. It does not safeguard the interests of the country, as it claims, but places the "noose" of the inter-imperialist antagonisms around the neck of our people.

So, when Greece is becoming a "tool" in the Euro-Atlantic plans against Russia. The bourgeois class of Russia, seeking to benefit from any fissure inside the opposing NATO alliance, signed an agreement with Turkey to sell it the modern Russian s-400 systems.

This is a move that is integrated in the inter-imperialist antagonisms and which are being conducted in every way. Diplomatically, as we see from the mutual expulsions of US-Russian diplomatic personnel, militarily, as we see from the increase and mutual targeting of the enormous arsenal, as well as economically, around how, for example, the international weapons' market will be divided up.

At the same time, however, such moves, at a time when Turkey is directly threatening the sovereignty of 17 Greek islands, only contributes to intensifying the arms race between the bourgeois classes. A race which the two peoples will pay for, at a time when the Greek and Turkish peoples are facing the impasses of the capitalist development path, poverty, unemployment, exploitation.

In addition, the sale of these weapons, even when they are considered to be "purely defensive" reinforce and strengthen the aggressiveness of the Turkish bourgeois class at the expense of Greece and other countries, like Syria, whose borders Turkey is disputing.

This is the reason why when the governments claim that our country is a "pillar of stability" is a "triangle of instability", because it is assimilated in the plans of the USA-ANTO-EU, they are once again telling lies.

In reality, they want the working class and our people to wear Euro-Atlantic "blinkers" which will impede them from seeing how dangerous our country's involvement in these antagonisms is, which serve aims alien to theirs and specifically aims related to how the bourgeois classes, above all the strongest ones, the "lions", and then the rest, the 'tigers", "hyenas", and even the "vultures", will share the "prey" of the energy resources, raw materials, the transport routes of the commodities, the market shares.

This is the reason the much vaunted "pillar of stability" of the SYRIZA-ANEL government, as well as the previous ND and PASOK governments is made of "straw", illusions, is built on the "shifting sands" of the instability of capitalist barbarity, of the economic crises and imperialist wars. 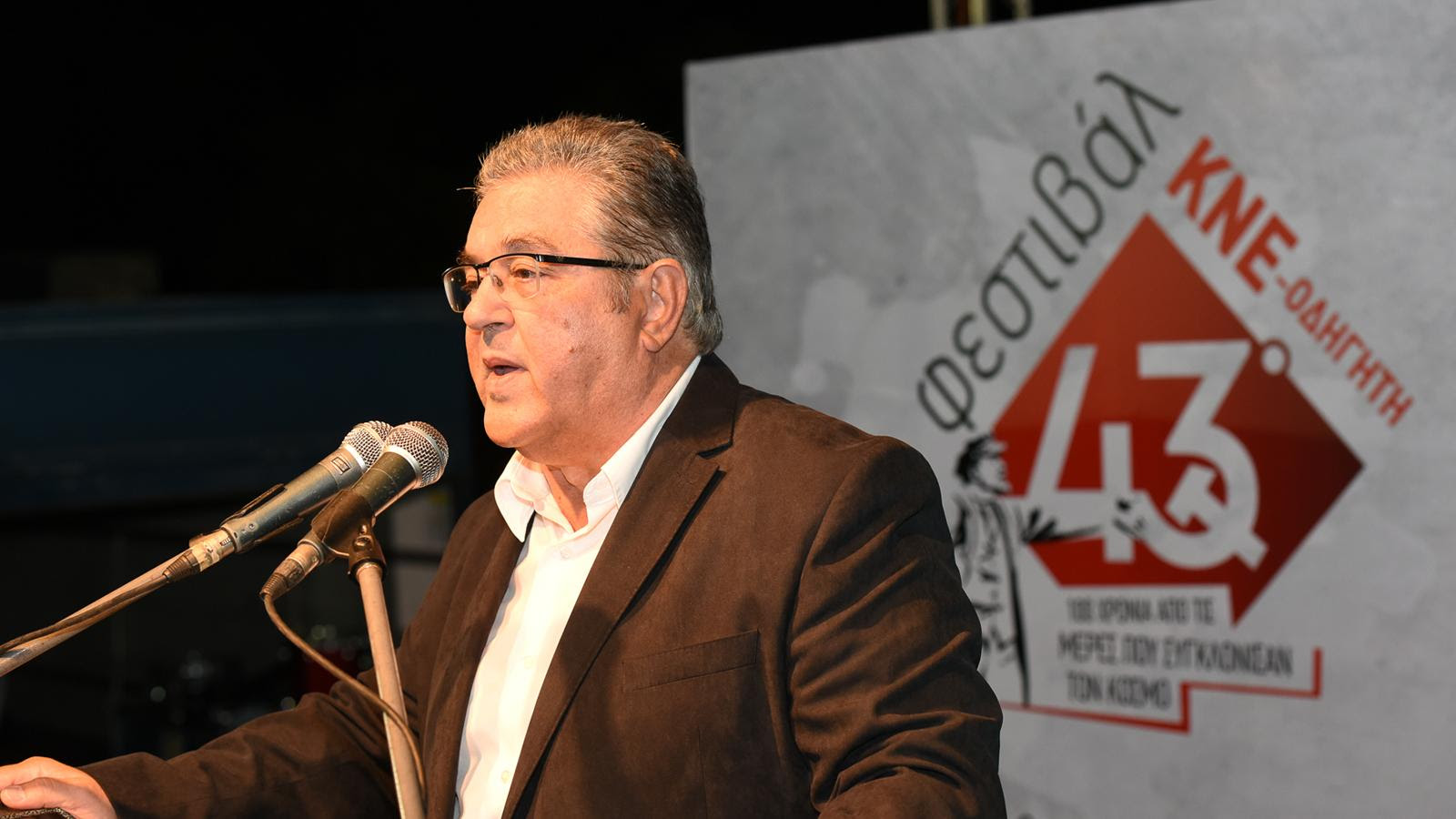 Indeed, over the last 8 years when Albania has been a NATO member, the trend to expansionism, unacceptable territorial claims against Greece has not receded but on the contrary has intensified, while Albania cancelled the agreement on the EEZ in the Ionian Sea, which had previously been signed.

Of course, neither NATO nor the EU can vaccinate the Greece-FYROM relations with "peace" and "security".The rekindling in the recent period of discussions about the issue of the "name", the involvement of various mediators in order to resolve this issue is also integrated in the framework of the further assimilation of the neighbouring country in Euro-Atlantic imperialism.

The USA and its allies do not want at all to see the increase of the influence of their competitors in FYROM and its integration into energy plans and other plans that are in conflict with their own. In any case, we cannot forget that next door, on the borders with Kosovo, the USA has its biggest base in the world, Camp Bondsteel.

Nor can the various political-military axes, which are being promoted, like those with Israel or Egypt, safeguard "peace" and "prosperity".These "axes" which indeed they present as "richly dowered brides" and as a solution for the unimpeded exploitation of the energy wealth of Greece and Cyprus, for the salvation of the people in conditions of capitalist crisis, the only thing they can create are new torments for our people.

To begin with, because wherever "axes" are being created all over the capitalist world, life demonstrates that they find equally strong "anti-axes" in front of them, i.e. rival economic and geopolitical interests. Then it is well-known that the few, the enormous energy colossi profit from the exploitation of the energy wealth and not the working class, not the peoples!

This is the reason why the pressures being exerted on the Cypriot people are unacceptable, regarding an "alleged" solution to the Cyprus issue, in the name of the unimpeded exploitation of the energy resources by the monopoly groups and with the aim of legitimizing the consequences of the Turkish invasion-occupation and its results.

The KKE consistently expresses its solidarity with the Cypriot people against the Turkish invasion-occupation and every kind of dichotomous "solution".

Our party fights for a united Cyprus, for one and not two states, with one sovereignty, one citizenship, one international personality, for a common homeland for Greek-Cypriots and Turkish-Cypriots, without occupation and other foreign armies, without foreign bases, without guarantors and "protectors", with the Cypriot people masters in their own land."