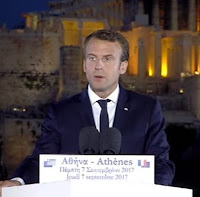 Mr.Macron comes to Greece for business, as a representative of French business groups that accompany him and which, in order to invest in our country, will demand the same "labor jungle" that they also demand for French workers."