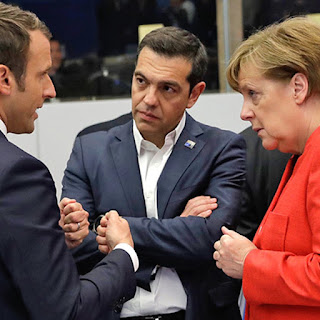 On the occasion of the visit of French President Macron to Greece, PAME issued the following statement:
The “growth” of the profits of business groups, the competitiveness of capital requires the attack on workers’ rights and gains.
Therefore, irrespective of the country and the political label of each government, European Union and the political parties of the capital promote anti-workers’ reforms that target to reduce wages, pensions etc., and at the same time to put obstacles (if not to totally ban) in the Collective Action and Demands of Workers, in the trade union rights and freedoms of the working class.
Either with memorandums or without, the antiworkers’ attack across Europe is unified, lasting and continuous.
At the time when the SYRIZA government of Greece repeats the fairy tail of the “Fair Growth”, utilizing the visit of French President Macron, it is important to look at some indicative measures that are promoted in France, against which the working class of France goes on strike on September 12.

All these antiworkers’ measures come after the announcement of the French government to reduce taxation for businesses from 33% to 25%.
We call the working class and its trade unions to prepare our response in workplaces and sectors against the antiworkers’ policy and the attack of the capital which is implemented unified by the governments of all colors across Europe.
We express our solidarity with the workers’ strike in France on September 12.