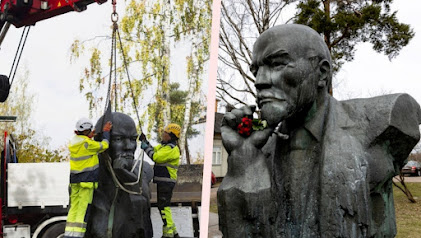 Using the pretext of the imperialist war in Ukraine, the authorities of Kotka, Finland proceeded to the removal of the last remaining statue of Vladimir Lenin in the country. This decision comes as a consequence of the escalation of anti-communism within the EU member-states, following the Russian invasion in Ukraine.

More specifically, the statue of Vladimir Lenin in Kotka's Pohjoispuistokatu square was relocated to a warehouse on Tuesday.

The move comes after Kotka City Council voted to remove the statue from the square in June, following calls for its removal after Russia invaded Ukraine.

The statue is part of the City of Kotka's art collection, and its possible use in an exhibition will be decided by the Kymenlaakso Museum.

Kirsi Niku, director of the Kymenlaakso Museum, said the museum's opinion is that the statue could well have remained in its original location. "Even if this generation doesn't see it, future generations will certainly be interested in it. It is history in its own time," Niku told Finnish reporters.

The museum plans to consider how the statue will be used, but has offered no timetable, with Niku estimating that such a decision could take years.

Earlier this year, the city of Turku removed another Lenin statue and Helsinki removed a Soviet-gifted statue in August.