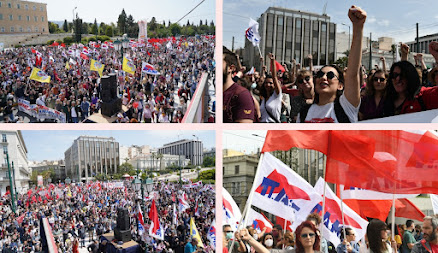 136 years since the uprising in Chicago, in the shadow of another imperialist war that is taking place for the profits of the capitalists, in the face of the escalating attack of governments against the workers' rights, the message of the May 1st protests throughout Greece is a beacon of hope.
The May Day rally expressed support and solidarity towards the workers of COSCO at Piraeus port who, once again, fight for their rights against the galley-labor conditions created by the Chinese monopoly: Permanent and stable jobs for all employees in the port, full-time and indefinite contracts for all employees, health and safety measures in the workplace. On April 28th the dockworkers in Piraeus port decided to continue their strike till the administration of COSCO accepts their rightful demands, so that no other worker will lose his life or be injured in the workplace.

The May Day rally in Athens was attended by the General Secretary of the CC of the Communist Party (KKE), Dimitris Koutsoumbas, who made the following statement to journalists:

“The only right side of history is the path of the class struggle, the one that moves the wheel of history forward until the complete liberation of the working class, with the abolition of exploitation of man by man. Have a nice workers' day!”.

Similar rallies, honoring the Workers' Day, took place in all major Greek cities, including Thessaloniki where thousands of people paid tribute to the heroic workers-strikers who were slaughtered by police forces on the orders of Metaxas dictatorship.