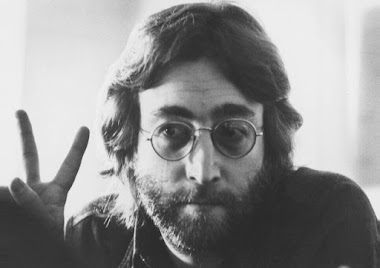 John Lennon, the legendary English co-lead singer of The Beatles and one of the most popular songwriters of the 20th century, was murdered 40 years ago, on December 8th, 1980 in New York City.

A vocal opponent of the Vietnam War and a sharp critic of British government's crimes in Northern Ireland, Lennon expressed himself politically through some extraordinary songs. Among these are “Give Peace a Chance”, “Working Class Hero” and “Imagine”.
Referring to the “Working Class Hero”, a masterpiece song which was released in his 1970's album “John Lennon/Plastic Ono Band”, Lennon said in an interview:

Imagine there's no countries
It isn't hard to do
Nothing to kill or die for
And no religion too
Imagine all the people living life in peace, you

Imagine no possessions
I wonder if you can
No need for greed or hunger
A brotherhood of man
Imagine all the people sharing all the world, you

As for “Imagine”, which is widely regarded as Lennon's signature song, it expresses the songwriter's wish for a world without artificial divisions of the modern social order, including organized religion, economic class and geopolitical borders. For Lennon himself, “Imagine” was his own “Communist Manifesto”.

According to him, “Imagine was “anti-religious, anti-nationalistic, anti-conventional, anti-capitalistic, virtually the Communist Manifesto, although I am not particularly a communist and I do not belong to any movement… But because it is sugarcoated, it is accepted”.

Indeed, John Lennon was certainly not a communist and far from being even a radical leftist. But he managed to express the vision of a better world without wars, poverty and exploitation in just twenty-two lines of lullaby rhyme. For this contribution Lennon deserves to be remembered as a revolutionary of music history. He was a dreamer; but he was not the only one.