KKE in the European Parliament: Regarding the issue of the new anti-communist law in Bulgaria 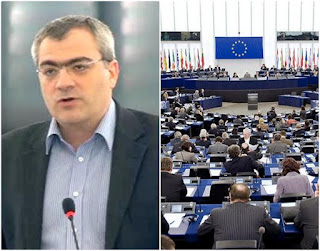 Source: inter.kke.gr.
On the 24th of November 2016 in Bulgaria a "Law for the amending and supplementing of the Law which declares the communist regime in Bulgaria as criminal” was voted upon in first reading, which among other things provocatively provides for the prohibition of the use and placement of  communist symbols and the removal of symbols, slogans, photographs, signs and other marks or objects from the years of socialism from public spaces or, if it is not possible to remove them immediately, the placement of a sign on these which will refer the following: "the communist regime in Bulgaria during the period 09.09.1944 - 11.10.1989 and the actions of the CP of Bulgaria have been declared criminal by a law voten upon by the 38th National Assembly."
Penalties and large fines are also foreseen for those who do not comply, as well as provisions to the Ministry of Education, the universities, schools, the deans, professors and teachers to harmonize school and university books with this unacceptable law.


The criminalization of communist ideology in Bulgaria and in other Member States is part of the EU’s anticommunist campaign that goes hand in hand with the intensification of the anti-peoples attack and is attempting to erase the achievements of socialism from the memory of the people and to hide the historic truth from the youth.
Since the EU selectively - when its interests dictate it - invoked the "human rights" in Member States or in third countries the Commission is asked:
Which is its position against this new anticommunist law in Bulgaria? Does the Commission confirm the fact that the EU has given directions for the establishment of anticommunist laws as a series of member states of the EU are promoting similar unacceptable persecution measures against the Communist Parties and the action of communists?
30.11.2016