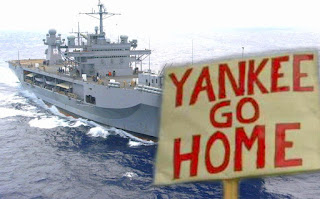 We call the working class, the working people to strengthen the struggle against the involvement of Greece in NATO's war plans, for the disengagement (exit) of our country from NATO's "nest" and every imperialist alliance, for the removal of foreign military bases and nuclear (weapons), the return of the military forces from the imperialist missions, in order to put in practice the slogan "Neither soil, not water to the murderers of the people". This struggle must be included to the struggle for the overthrow of the rotten exploitative system which generates crisis, wars, refugees".