ΚΚΕ: The Paris Agreement on the Climate provides new field of profitability for the monopolies, amid fierce competition 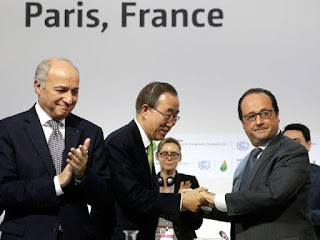 Source: inter.kke.gr.
The KKE delegation to the European Parliament voted against its ratification by the European Parliament.
The KKE delegation to the European Parliament voted against the ratification of the Paris Agreement on the "climate change" in the European Parliament plenary in Strasbourg, because it perpetuates the causes which cause environmental problems, the ones which the capitalist development path creates and exacerbates.
In its speech to justify its negative vote, the KKE delegation to the European Parliament stressed the following:
"The Paris Agreement on Climate, which is a temporary compromise between imperialist centers and powerful capitalist countries, neither wants, nor can address the acute environmental problems created by the capitalist mode of development, as it sees the environment as a means of increasing the profits of business groups, which pillages natural resource and also have devastating effects not only due their uncontrolled emissions, but also due to the imperialist wars around the planet.
The Agreement has the various Emissions Trading Systems (ETS) at its heart, which as mechanisms for the profitable purchase of pollution itself have been proven to intensify environmental degradation.
The "green" technologies are designed to open up new investment fields for the monopolies with large and quick profits amid intense rivalry, where the EU plays a leading role, believing that their own business groups have a comparative advantage in this sector. As for financing the poor, less developed countries in Africa, Asia, etc. to allegedly meet the agreement is but another way for the large business groups to enter new markets, for the control and greater plunder of resources and of their peoples.
The certain result also of this agreement (as of the previous one, Kyoto, etc.) will be the aggravation of environmental problems, conditions and living conditions of the families of the popular strata.
Only the socialization of wealth and means of production, an economy and society that will not be based on capitalist profit, but on the satisfaction of popular needs, can ensure a planned, consistent and balanced impact of the working people on nature, on the environment. For such a life which the working people deserve, they must take the power of the economy into their hands creating their own social alliance, breaking with capitalist barbarism, the monopolies and their imperialist unions."
07/10/2016,
The KKE delegation to the European Parliament.