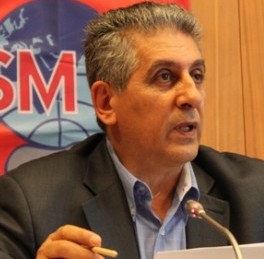 First of all, I want to express my appreciation for the trust you demonstrated towards me by electing me as General Secretary of WFTU. On behalf of PAME and the class-oriented trade union movement of Greece we thank you for your repeated support. With my reelection, I feel an ever greater responsibility towards you and I commit to give all my best efforts to the struggle for the strengthening of the WFTU and the emancipation of the international working class.
Dear brothers and sisters,

Since my election in 2005 in the position of General Secretary, I always tried to maintain with you a comradely, honest, straight and clear relation. This is how I want to continue to be today and therefore I inform you that this will be my last term as General Secretary of WFTU. In the next Congress, we will elect a younger comrade with the appropriate criteria. We have capable, worthy and dedicated fighters in the WFTU family. One such militant we will select collectively and we will trust upon him the leadership of our Organization for the years to come.
It is our duty, our obligation to actively help – not only in words - for the development of new cadres. And it is an obligation, at the same time, for the leadership to know, to understand, to realize when it is time to step down. A leader of the class-oriented trade union movement must step down and not be thrown out. When time comes he must give space to younger comrades. Our movement has many worthy cadres. No one is irreplaceable. Irreplaceable are only the ones lying in their graves.
Dear colleagues,
Allow me to express my gratitude to all those behind the scene who worked hard for almost a year for the organizing of this Congress. I want to thank our South African Comrades, Zola, Lucian, Lulamile, Zanele, Scumbuzo, Ntombi, Luphert and so many others as well as the the staff of the Central Offices of Athens, the translators, the drivers, journalists who are here today and all the staff of the ICC and the hotels. On behalf of all the delegates and the observers we express our appreciation and love.
Allow me now to move on to the Conclusions of the Congress.
My first conclusion: Is that this was a Congress that was open, democratic, class-oriented and internationalist. A Congress that befits and reflects the history of the 71 years of the WFTU. We heard 112 speakers from 103 countries. They spoke freely. They made their proposals; they made their criticism, some of them also made self-criticism. Self-criticism has a special value because it needs courage to make honest self-criticism and self-criticism together with comradely emulation and criticism are the basic tools for the improvement of the militant.
Our Congress works during all days were open to all Mass Media, to all observers and guests, The Administration of the Congress and the operation of the Committees were in good level.
We voted yesterday with secret ballot organized by the IEC (Independent Election Committee) and we elected a General Secretary. We voted democratically and freely for over an hour and we elected as new President of the WFTU, comrade Mzwandile Makwayiba. His election is a new positive step for our organization and also underlines the priority we give to the African Continent and our effort to strengthen the trade union movement. Also in about an hour there will be a second secret ballot also organized by the IEC of South Africa to elect the new Presidential Council and the new Financial Control Committee.
A little while ago we approved all together by vote the new Program of Action, the Platform of Action 2016-2020 which was presented on behalf of the Resolution Committee by comrade Swadesh Devroye. A resolution which is ambitious and realistic, it is contemporary and necessary. A resolution which is a result of the pre-Congress proposals and the discussions held during our Congress.
What does this general picture prove?
The democratic character, the open, unifying character of our Congress.
The Second Conclusion by the Congress is: There are new organizational duties for all of us. Even greater responsibilities for our cadres. Greater tasks, more serious expectations for the organizational strengthening of the class-oriented trade union movement. Because only a movement which is organizationally solid, massive and militant can effectively and successfully defend its members and all the workers.
Therefore we commit at the organizational Level to: