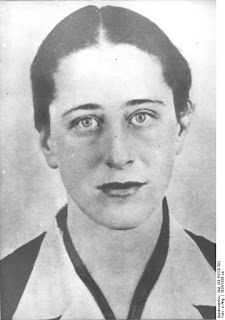 The real identity of Olga was revealed as a result of the close collaboration between the Brazilian diplomacy and Gestapo. After a demand by the Nazi Germany and despite an international campaign, Olga was taken back to Germany in September 1936. The captain of the German liner that took her, cancelled scheduled stops in non-German European ports, in order to avoid possible communist attempts at rescuing her. On arrival, Olga was put in prison, where she gave birth to a daughter, Anita Leocádia. The child was subsequently released into the care of her grandmother, Leocádia Prestes.

This brave communist, Olga Benário, was eventually sent to Ravensbrück concentration camp and from there to Bernburg Euthanasia Centre in 1942, where she was killed in gas chambers.

* * *
In 2004, based on the homonym book by Fernando Morais, the film "Olga", directed by TV and film director Jayme Monjardim, was released. In the leading roles are Camila Morgado, Caco Ciocler, Luís Melo Fernanda Montenegro, Leona Cavalli, etc. "Olga" was Brazil's submission to the 77th Academy Awards for the Academy Award for Best Foreign Language Film. The film has won more than 20 awards in Brazil and internationally.

Recently, "New Star Art Cinema" presented the film exclusively at Alkyonis cinema in Athens, Greece. A prologue speech about "Olga" was delivered by the KKE MP, Liana Kanelli who described the movie as "a powerful film".

The Trailer of the film "Olga".