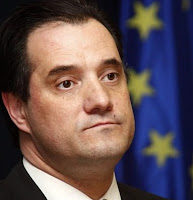 "The New Democracy's vice president Ad.Georgiadis, not only resorts to an anticommunist delirium of previous decades, but even comes to the point to promote- in the name of democracy- the authoritarian fascist practices of countries with the EU eulogies, which prohibit the existence of communist parties and prosecute the communist ideology.
It is obvious that this delirium is borne by the leadership of New Democracy, as it has- among other things- as an aim to give to SYRIZA communist characteristics, which everyone knows that it hasn't, thus exercising a convenient criticism for the preservation of the bipolar-bipartite game".