Truth and Lies about Socialism: On the 60th anniversary of the counterrevolutionary events in Hungary 1956 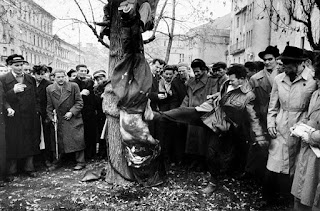 On the 60th anniversary of the
counterrevolutionary events in Hungary 1956.

Below you can find extracts from the publication of the CC of KNE “Truth and Lies about Socialism” (Synchroni Epohi 2012) in relation to the counterrevolutionary events that took place in Hungary in 1956.

"In autumn 1956, Hungary announced its withdrawal from the Warsaw Pact, but Soviet troops invaded the country and suppressed the uprising."


"In 1968 the Czechoslovak attempt to distance itself from Moscow was met with an invasion of the country by the member states of the Warsaw Pact.”
(History book, 3rd grade of High School) 70

The historical experience of socialist construction in the Soviet Union and the People's Democracies of Europe confirmed that class struggle continues during socialist construction, which means that a counterrevolution is possible. The attempts to overthrow t workers' power in a number of European countries (counterrevolutionary attempted coup in the GDR in 1953, attempted counterrevolutions in Hungary in 1956, Czechoslovakia in 1968 and Poland in 1980-81) was nothing other than efforts of the defeated bourgeois classes of these countries to retake power. These efforts, as we shall see below, were strongly supported by international imperialism in a multifaceted way.

All these counterrevolutionary actions are presented by the imperialist propaganda as uprisings for "democracy" and against "repression", while their treatment by the Soviet Union and other socialist countries is presented as an "invasion".
What is written in the school textbooks is characteristic and corresponding references flood the bourgeois press when we have the "anniversaries" of the events. The interpretation that is given by the imperialist propaganda to the events is also accepted by opportunism.

But what really happened? We should examine how the counterrevolutionary events developed and were organized in Hungary and Czechoslovakia.

The counterrevolutionaries organized a large-scale manhunt that was directed mainly against the members and the cadres of the Hungarian Working People's Party. On 30 October 1956 for example, according to the Associated Press, 130 people in the Party offices were seized and were hanged upside down or beaten to death. 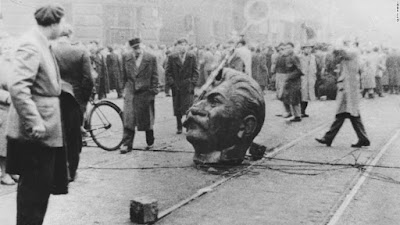 The attempted counterrevolution in Hungary

From 13 to 16 of June 1953, the leadership of the in the Party offices led by Mathias Rakosi, Secretary General of the CC and Prime Minister, visited the USSR at the invitation of the Soviet leadership. After this visit, the Political Bureau of the Party decided to include in its composition the cadre of the Party, Imre Nagy. On July 2, Nagy, who supported the bourgeois multi-party system, was appointed prime minister.

These developments sharpened the internal party struggle. In 1955 Nagy was removed from the party and state posts and later expelled from the Party. In December of '55 the anti-communist writers' club "Petofi'' was created. M. Rakosi, Secretary General of the CC of the Hungarian Working People's Party, in plenary session of the CC in May 1956 characterized the position of Stalin regarding the sharpening of the class struggle in conditions of the workers' power as "mistaken and harmful." Two months later, Rakosi was dismissed from his duties. On 13 October 1956, Nagy was restored and reintegrated into the party’s ranks. From the above, it is clear that an intense struggle was being waged in the leadership of the party, and that there was confusion and wavering as regards the revolutionary line. It also seems that there were different trends of opportunism within the Party, the more open led by Nagy and the centrist by Rakosi. The Party not only showed weakness in dealing with the counterrevolution, but the emergence of opportunism in its ranks assisted this process.

At the same time, a huge wave of terrorism and murders against communists was unleashed, particularly in Budapest. The leadership of the Party confronted the situation by declaring a state of emergency in the country, calling for the assistance of Soviet troops and agreed that Nagy should take over as a President of the cabinet.

The attack against the workers’ power escalates.

At the same time, the government of Nagy was promising arms to the revolutionary workers' guards that were established in various companies and in party offices, but delivered them to the counterrevolutionaries. Nagy could not come out openly as enemy of socialism. As it is noted in the publication of the Hungarian State Information Service: "... Imre Nagy in his radio announcement on the 25th October noted that the " intervention "of the Soviet troops in the fighting was demanded by the vital interests of our socialist regime. (...) Even Imre Nagy could not present himself at this point as being anything other than a steadfast supporter of the socialist people's power, as a friend of the Soviet Union, as an irreconcilable enemy of the counterrevolutionary attackers. (...) If Imre Nagy on October 23 had a taken an open position against the Warsaw Pact and in favor of “neutrality according to the model of Austria”, there could have been no discussion of his appointment to the Presidency of the Cabinet. » 71

The subversive activity of imperialism.

The declassification of secret documents from the archives of the imperialist powers allows us to have a "picture" of the subversive activity that the secret services of international imperialism carried out in various ways. Indicative of this activity are the following directions given in the report of the National Security Council "The US policy toward the Soviet "satellites" in Eastern Europe" that was approved by the US President D. Eisenhower, in July '56:

"In order to encourage the establishment of governments that have been elected freely in the "satellites" as a means of disorganization, and not as an end in itself, you should be ready in any case, covertly and under the appropriate guidance to help the nationalists in every way in which independence from the Soviet domination is possible and where the consistency of the US and the "free world" will not be endangered by it. »

On the 30th of October, the Soviet troops withdrew from the country at the request of Nagy. Then the counterrevolutionary forces continued even more savage offensive. "The counterrevolutionary terrorism was dominant in the streets of Budapest-the, Communists and progressive people were being murdered. Thousands of Party militants, presidents of farmers’ associations, presidents of councils, supporters of socialism were imprisoned throughout the country and their slaughter was being prepared. In the political arena capitalists, landlords, bankers, princes and counts had reappeared, led by Midsenti. They appeared in Parliament and in only two days founded 28 counterrevolutionary parties" 72.

Fascists and supporters of the Nazis were openly involved in the counterrevolutionary events. The correspondent of the East German newspaper Veli Autsontag wrote about one of the counterrevolutionaries: "The first thing I saw on him was the medal of the German Iron Cross 73", while the French newspaper France-Soir wrote that "the most reactionary and fascist elements" had a leading role in the events 74.
The Nagy government's announcement about  withdrawal from the Warsaw Pact and the "neutrality" of the country on the 1st of November lent such momentum to the counterrevolutionaries that it even led the Reuters correspondent to write: "Since yesterday there is a manhunt in the streets of Budapest" , people " are being hunted and slaughtered like dogs, hung from lampposts and balconies. Across the country there are scenes that remind us of the return of the "whites" to Hungary in 1919.” 75. The role of international imperialism.

The involvement of the imperialist powers in the "Hungarian uprising" is evidenced by what a British official stated 40 years later, without revealing his identity: "In 1954, we were taking agents from the Hungarian borders, which we drove to the British-controlled area of Austria. We took them to the mountains and we gave them military training... Then, after we had trained them in explosives and arms, I took them back ... We trained them for the uprising. 76 ".

The Pravda also wrote in an article: "The western bourgeois newspapers write with enough sincerity that reaction was preparing the Hungarian events a long time ago and with diligence, both internally, and from abroad, that from the beginning one could see in everything the experienced hand of the conspirators. The leader of the American spies, Allen Dulles, openly stated that “we knew" what would happen in Hungary. 77"

The imperialists also throughout the duration of the counterrevolution through the radio station Free Europe, which was funded and guided by the US government, were calling on the Hungarians to "rise up". With its broadcasts, they called on them to carry out sabotage, to support with food and supplies the counterrevolutionaries, and to support their actions.  It broadcast that the US would send military aid. The radio station, according to what Henry Kissinger wrote, appealed to the Hungarians to "stay committed to their revolution and not to accept any compromise (...) Fighters for Freedom, don't hang your guns on the wall!78"

The US plans are also revealed by the recommendation of J. Dulles at the meeting of the National Security Council on 31 October 1956, regarding US policy in Hungary and Poland, while the counterrevolution was under way. He said of Hungary: "(...) 22. Immediate humanitarian aid for the Hungarian people. (...) 23. If a government  comes to power at least as independent in Poland as well: a. To be prepared to provide (...) economic and technical assistance in reasonable quantities, enough to give the Hungarians an alternative solution to total dependence on Moscow. (...) d. To take appropriate steps to reorient Hungarian trade to the West. 79 "

The defeat of the counterrevolution by the Hungarian working class and the Red Army.