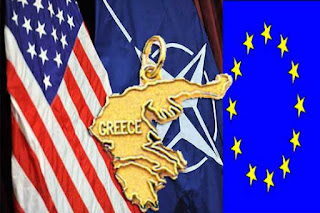 The bourgeois parties (SYRIZA, New Democracy, Independent Greeks-ANEL, PASOK, Potami, Center Union) voted in favor of the memorandum, while the Communist Party of Greece (KKE) was the only party which voted against it, rejecting and denouncing the involvement of the country in the imperialist plans of NATO.


The Nazi, fascist Golden Dawn voted against the memorandum - not because of any antiimperialist stance or sentiment- but, as the fascist explained, because it supports a... different foreign policy approach, towards a closer relationship with capitalist Russia.

The memorandum came to the Parliament as a result of Greek government's offer to host NATO's Joint Electronic Warfare Core Staff (JEWCS) equipment near the 113th combat wing in the city of Thessaloniki. It should be noted that JEWCS consists NATO's capability center for Electronic Warfare (EW), providing the imperialist alliance and its member states with EW expertise and training on EW.

The memorandum about JEWCS was denounced by the Thessaloniki's branch of Greek Committee for International Peace and Detente (EDYETH) which, in a statement, pointed out that "the ever deepening engagement of our country in the imperialist plans and the dangerous developments in the broader area becomes very clear". According to EDYETH "the ratification of the memorandum and the installation of the Staff consists a new link in the chain, which the previous governments as well as the current one, enchain our people, having as an aim the better service of the monopolies' plans in the broader region. Especially for our city, in which the NRDC-GR (NATO Rapid Deployable Corps - Greece) has been transfered".

Read more about the policy of the SYRIZA-ANEL "left" government in favor of NATO and the Imperialists:

- NATO Imperialists not welcome in Piraeus! KKE denounces the presense of US Navy flagship in Greek port.

- US President Obama to visit Greece: When SYRIZA's social democracy "worships" the Imperialists.