Raúl Castro: "Cuba will not cease defending its revolutionary and anti-imperialist ideals" Source: Granma.
KEY REMARKS BY ARMY GENERAL RAUL CASTRO RUZ, PRESIDENT OF THE STATE COUNCIL AND THE COUNCIL OF MINISTERS OF THE REPUBLIC OF CUBA, AT THE 17TH SUMMIT OF THE NON-ALIGNED MOVEMENT

MARGARITA ISLAND, VENEZUELA, SEPTEMBER 17, 2016
Esteemed comrade Nicolás Maduro Moros, constitutional President of the Bolivarian Republic of Venezuela, Heads of State and Government,
Esteemed ministers, delegates and guests,
Ladies and gentlemen,
We are 120 Non-Aligned States which adhere not only to the Bandung Principles, but also to the Declaration of the Non Aligned Movement on Purposes, Principles and the its Role in the Current International Juncture approved  at the 14th NAM Summit in Havana. Our enormous strength cannot be underestimated when we proceed in a concerted fashion.
In the 14th NAM Summit held in Havana in 2006, we rejected any attempt at ‘regime change’ and appealed to all countries to abstain from resorting to aggression or to the use of force.
Also in Havana, in January 2014, the heads of State and Government of the Community of Latin American and Caribbean States (CELAC) signed the Proclamation of Latin America and the Caribbean as a Zone of Peace thus reaffirming our commitment to the principles enshrined in the United Nations Charter and International Law as well as to the peaceful settlement of disputes and full respect for the inalienable right of every State to choose its political, economic, social and cultural system, as an essential premise to ensure coexistence among nations.
However, we are witnessing increasing attacks on Venezuela’s sovereignty and self-determination. Cuba reaffirms its unconditional support to the Venezuelan Government and people, to the civic-military union and to constitutional President Nicolás Maduro Moros.
We strongly repudiate the judicial-parliamentary coup d’état engineered against President Dilma Rouseff, for it is an act of contempt against the sovereign will of the people who elected her with more than 53 million votes.
Our sister nation of Colombia may count on the full support of Cuba as it moves forward along the challenging path of the implementation of the Agreement, and the consolidation of the stable, fair and lasting peace that Colombians deserve.

We express our confidence in the people of the Arab Republic of Syria for we know that they are capable of resolving their differences by themselves without foreign interference aimed at promoting ‘regime change’.
Comrade President,
It is unacceptable that the Palestinian people are still victims of occupation and violence, and that the occupying power continues preventing the establishment of an independent Palestinian State with its capital in East Jerusalem.
Every attempt to secure the self-determination of the abused Saharawi people has failed, thus the international community needs to apply itself to resolving this issue.
We affirm our solidarity with the historical demand of the Puerto Rican people for self-determination and independence.

We also uphold our solidarity with the claim of the Republic of Argentina over the Falklands, South Sandwich and South Georgia Islands.
Esteemed comrade Maduro,
To Cuba, non-alignment means to struggle for the radical modification of an international economic order imposed by the big powers, the same that has made possible for 360 persons to accumulate an annual wealth exceeding the income of 45% of the world population. The gap between the rich and the poor keeps widening. Technology transfer from the North to the South countries remains an elusive goal while globalization basically privileges a special group of industrial nations. Meanwhile, the debt of the South countries, which never ceases to multiply, now amounts to over 1.7 trillion dollars.
At the moment, 2.9 billion people are forced into unemployment and extreme poverty, and millions of children perish every year from hunger and preventable diseases; nearly 800 million people remain illiterate while more than 1.7 trillion dollars are destined to military expenses.
Non-alignment also means to struggle for the reduction of the knowledge gap, and for the possibility to use information and communication technologies for development and cooperation. We reject the growing militarization of these technologies and their aggressive use against other countries.
Climate change continues to aggravate while in the developed countries irrational production and consumption patterns persist that threaten the conditions required for the survival of our species.
On the other hand, the realization of human rights remains a dream for millions of people all over the world. The United States and Europe resort to manipulation, double standards, selective criteria and the politization of this issue while waves of refugees concentrate at European borders, waiting a for just, stable and permanent solution that can protect their lives and dignity. 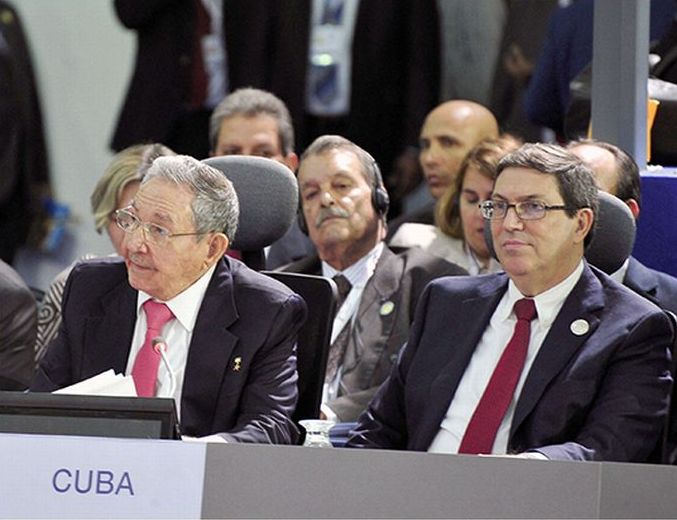 Esteemed President Maduro,
Twenty-one months have passed since our simultaneous announcement with President Barack Obama of the decision to reestablish diplomatic relations between Cuba and the United States.
There have been some progress, mostly in the diplomatic area and cooperation on issues of common interest, but the same cannot be said of the economic and commercial sectors due to the limited, albeit positive, scope of the measures so far adopted by the U.S. Administration.
Cuba will persevere on its demand to have the economic, commercial and financial blockade lifted, a blockade that brings so much damage and hardship to our people, and which also has a negative impact on many other countries due to its extraterritorial implementation. By the same token, Cuba will continue urging the return to our sovereignty of the territory illegally occupied by the United States Naval Base in Guantanamo.
There will not be normal relations before that issue is resolved and other policies harmful to Cuba’s sovereignty still in force are terminated, such as interventionist and subversive programs.
We reaffirm our disposition to engage the United States Government in a civilized relationship, but Cuba will neither renounce any of its principles nor compromise on its sovereignty and independence. Cuba will not cease defending its revolutionary and anti-imperialist ideals or supporting the self-determination of all peoples.
Comrade Maduro,
We wish our sister Republic of Venezuela full success in the leadership of the Non-Aligned countries. At the same time, we congratulate the Islamic Republic of Iran on its good work during this past term at the head of the Movement.
The only alternative to the enormous dangers and challenges lying ahead is unity and solidarity in defense of our common objectives and interests.
Thank you, very much.