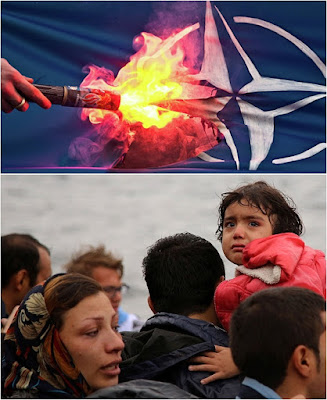 Imperialists Collide: War and Refugees in the Eastern Mediterranean and the Middle East. The dangerous role of the EU and NATO.
Remarks of Kostas Papadakis, Member of the European Parliament (MEP) and member of the CC of KKE, at the panel organised by the site Marxism-Leninism Today, at the Left Forum John Jay College, City University of New York, May 21, 2016.
We would like to thank Marxism-Leninism Today for the opportunity afforded to us to hold a discussion today, here in New York, on serious issues related to the struggle of the KKE (Communist Party of Greece), specifically our internationalist struggle. Greece and the USA may be separated by thousands of miles, but our goal and ambition is for communists and radical militants to form unified criteria in terms of examining the developments and organizing the struggle for the interests of the working class.
Our tool for this must be our worldview, Marxism-Leninism, which provides us with the capacity to draw the necessary conclusions regarding the causes and development of complex issues that mark the era of the highest stage of capitalism, imperialism. Above all, communists at an international level must form a unified revolutionary strategy against a ruthless and powerful enemy, the capitalist system. This is not a task for a distant and undefined future. It is something absolutely necessary in today's conditions. Its absence leaves its mark on the developments, makes it difficult for the workers and the poor popular strata on both sides of the Atlantic to understand that the capitalist system is their real enemy, to recognize its objective laws and the methods it uses to achieve its goal, which is none other than the safeguarding of the maximum profitability possible and its own perpetuation as a system.