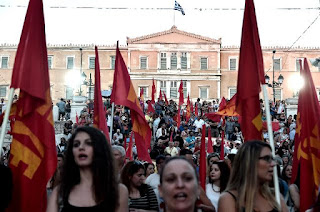 Source: inter.kke.gr.
On the 14/06/2016, The Workers Party of Ireland held an event in Belfast, Northern Ireland, on the topic:  «The European Union and the crisis of capitalism-lessons from Greece. A delegation of the KKE headed by Elisseos Vagenas, member of the CC and Responsible for the International Relations Section of the CC of the KKE had been invited to speak at the event. Below you can find his introductory intervention at the event.
Dear comrades and friends,
We are very pleased to be here today with you in Northern Ireland, at the invitation of the Workers’ Party of Ireland, in order to discuss the situation and developments in Greece, as well as the conclusions that the workers can draw from them. 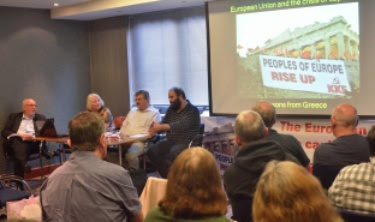 Today the so-called "European ideal" and "ideal of a united Europe" has unraveled in the people's consciousness, because life in the EEC and EU has clearly demonstrated that this organization does not widen the rights and gains of the workers but on the contrary attacks them, through flexible labour relations, the abolition of the 8 hour day, the privatization of healthcare, education and social security. It is driving the small farmers and livestock farmers off the land, through the CAP. It is bankrupting the urban self-employed, as it supports the activity of the monopolies everywhere.
The communist men and women support the struggle of PAME, the class-oriented movement, in which hundreds of trade unions participate; they support the struggle of the farmers, the urban self-employed, the youth.
Through daily activity, strikes, occupations, dozens of mass demonstrations, the superiority of the class-oriented movement is apparent. This movement comes into conflict with capital, the anti-people political line and government and employer-led trade unionism. It wins over new forces, new trade unions in its efforts to change the correlation of forces, to regroup the movement, to strengthen its mass characteristics, insisting on fighting for demands that correspond to the contemporary needs of the people.
A strong labour movement that fights in an antimonopoly-anticapitalist direction can be the spine of a great social alliance that will gather popular forces together, make its mark on the daily struggles and fight to overthrow capitalist barbarity.
This is the KKE's line of struggle, a party that has formed a revolutionary strategy and has dispensed with the rationale of intermediate transitional stages that operate within the framework of the system and have tormented the communist movement for decades. We fight for socialism and draw strength from this in the daily struggles for the workers'-people's rights, which require self-sacrifice and determination. We argue that the solution for the people is to be found in the unilateral cancellation of the debt, in the rupture and disengagement of the country from the imperialist organizations of the EU and NATO, something that only workers' power can impose for the benefit of the people, which will socialize the means of production and will implement the scientific central planning of the people's economy.
We know very well that our struggle is an international one, is not restricted by national borders, because capital is an international force. For this reason, we seek coordination and joint action with other communist and workers parties. A new form of cooperation between our parties has emerged in the last two years in Europe, in which the KKE, the WPI and dozens of other parties participate and have defined the EU as "the European imperialist centre, supports the aggressive plans against the peoples, and is aligned with the USA and NATO" and take a position against it. Our parties, inside the European Communist Initiative, stress that "there is another development path for the peoples». The perspective of another Europe, the prosperity of the peoples, social progress, democratic rights, equal cooperation, peace, and socialism are highlighted through the workers' struggles."
Dear comrades and friends,
At the end of our introductory intervention, we would like to warmly salute the communist men and women in Britain and Ireland for the struggle they are waging in the upcoming referendum, highlighting the reactionary class character of the EU. We assess that a large section of the working class, popular strata and youth support a vote to leave the EU, in opposition to capital and its power.
16.06.2016
Posted by In Defense of Communism