V.I.Lenin: "A United States of Europe, under capitalism, is either impossible or reactionary" 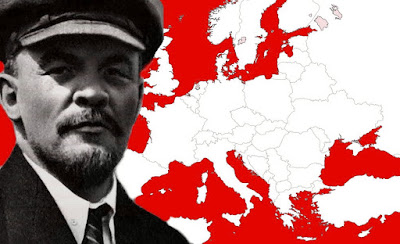 Vladimir Ilyich Lenin- On the Slogan for a United States of Europe.


In No. 40 of Sotsial-Demokrat we reported that a conference of our-Party’s groups abroad had decided to defer the question of the “United States of Europe” slogan pending a discussion, in the press, on the economic aspect of the matter.

At our conference the debate on this question assumed a purely political character. Perhaps this was partly caused by the Central Committee’s Manifesto having formulated this slogan as a forthright political one (“the immediatepolitical slogan...”, as it says there); not only did it advance the slogan of a republican United States of Europe, but expressly emphasised that this slogan is meaningless and false “without the revolutionary overthrow of the German, Austrian and Russian monarchies”.


It would be quite wrong to object to such a presentation of the question within the limits of a political appraisal of this slogan—e.g., to argue that it obscures or weakens, etc., the slogan of a socialist revolution. Political changes of a truly democratic nature, and especially political revolutions, can under no circumstances whatsoever either obscure or weaken the slogan of a socialist revolution. On the contrary, they always bring it closer, extend its basis, and draw new sections of the petty bourgeoisie and the semi-proletarian masses into the socialist struggle. On the other hand, political revolutions are inevitable in the course of the socialist revolution, which should not be regarded as a single act, but as a period of turbulent political and  economic upheavals, the most intense class struggle, civil war, revolutions, and counter-revolutions.


But while the slogan of a republican United States of Europe—if accompanied by the revolutionary overthrow of the three most reactionary monarchies in Europe, headed by the Russian—is quite invulnerable as a political slogan, there still remains the highly important question of its economic content and significance. From the standpoint of the economic conditions of imperialism—i.e., the export of capital arid the division of the world by the “advanced” and “civilised” colonial powers—a United States of Europe, under capitalism, is either impossible or reactionary.


Furthermore, Britain, France and Germany have invested capital abroad to the value of no less than 70,000 million rubles. The business of securing “legitimate” profits from this tidy sum—these exceed 3,000 million rubles annually—committees of the millionaires, known as governments, which are equipped with armies and navies and which provide the sons and brothers of the millionaires with jobs in the colonies and semi-colonies as viceroys, consuls, ambassadors, officials of all kinds, clergymen, and other leeches.

That is how the plunder of about a thousand million of the earth’s population by a handful of Great Powers is organised in the epoch of the highest development of capitalism. No other organisation is possible under capitalism. Renounce colonies, “spheres of influence”, and the export of capital? To think that it is possible means coming down to the level of some snivelling parson who every Sunday preaches to the rich on the lofty principles of Christianity and advises them to give the poor, well, if not millions, at least several hundred rubles yearly.

A United States of Europe under capitalism is tantamount to an agreement on the partition of colonies. Under capitalism, however, no other basis and no other principle of division are possible except force. A multi-millionaire cannot share the “national income” of a capitalist country with anyone otherwise than “in proportion to the capital invested” (with a bonus thrown in, so that the biggest capital may receive more than its share). Capitalism is private ownership of the means of production, and anarchy in production. To advocate a “just” division of income on such a basis is sheer Proudhonism, stupid philistinism. No division can be effected otherwise than in “proportion to strength”, and strength changes with the course of economic development. Following 1871, the rate of Germany’s accession of strength was three or four times as rapid as that of Britain and France, and of Japan about ten times as rapid as Russia’s. There is and there can be no other way of testing the real might of a capitalist state than by war. War does not contradict the fundamentals of private property—on the contrary, it is a direct and inevitable outcome of those fundamentals. Under capitalism the smooth economic growth of individual enterprises or individual states is impossible. Under capitalism, there are no other means of restoring the periodically disturbed equilibrium than crises in industry and wars in politics.


Of course, temporary agreements are possible between capitalists and between states. In this sense a United States of Europe is possible as an agreement between the European capitalists ... but to what end? Only for the purpose of jointly suppressing socialism in Europe, of jointly protecting colonial booty against Japan and America, who   have been badly done out of their share by the present partition of colonies, and the increase of whose might during the last fifty years has been immeasurably more rapid than that of backward and monarchist Europe, now turning senile. Compared with the United States of America, Europe as a whole denotes economic stagnation. On the present economic basis, i.e., under capitalism, a United States of Europe would signify an organisation of reaction to retard America’s more rapid development. The times when the cause of democracy and socialism was associated only with Europe alone have gone for ever.

A United States of the World (not of Europe alone) is the state form of the unification and freedom of nations which we associate with socialism—about the total disappearance of the state, including the democratic. As a separate slogan, however, the slogan of a United States of the World would hardly be a correct one, first, because it merges with socialism; second, because it may be wrongly interpreted to mean that the victory of socialism in a single country is impossible, and it may also create misconceptions as to the relations of such a country to the others.


Uneven economic and political development is an absolute law of capitalism. Hence, the victory of socialism is possible first in several or even in one capitalist country alone. After expropriating the capitalists and organising their own socialist production, the victorious proletariat of that country will arise against the rest of the world—the capitalist world—attracting to its cause the oppressed classes of other countries, stirring uprisings in those countries against the capitalists, and in case of need using even armed force against the exploiting classes and their states. The political form of a society wherein the proletariat is victorious in overthrowing the bourgeoisie will be a democratic republic, which will more and more concentrate the forces of the proletariat of a given nation or nations, in the struggle against states that have not yet gone over to socialism. The abolition of classes is impossible without a dictatorship of the oppressed class, of the proletariat. A free union of nations in socialism is impossible without a more or less prolonged and stubborn   struggle of the socialist republics against the backward states.


It is for these reasons and after repeated discussions at the conference of R,S.D.L.P. groups abroad, and following that conference, that the Central Organ’s editors have come to the conclusion that the slogan for a United States of Europe is an erroneous one.