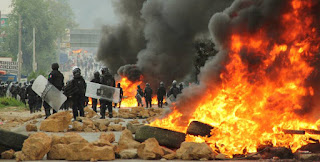 Doctors' leaders have condemned the killing of at least eight people during a teacher’s protest last Sunday in the state of Oaxaca.


As protests led by the militant CNTE teachers' union in Mexico continue, the country's doctors are set to join in the job action, calling for a national strike on June 22 to protest a neoliberal reform to the health system imposed by President Enrique Peña Nieto.
The group #YoSoyMedico17, which is comprised of doctors, pediatricians, surgeons, anesthesiologists and nurses, has been joined by more than 200,000 physicians from 32 states in opposing the so-called Universal Health System reform by Peña Nieto. The medical professionals say the measure is a "disguised way of privatizing health in Mexico," and said doctors were not consulted on the reform, according to Animal Politico.
The doctors' protest will join the ongoing national general strike by teachers.

Doctor’s also condemned the killing of at least eight people during a teachers' protest last Sunday in the state of Oaxaca, and denounced what they call intimidation and repression by authorities, as well as organized crime.
According to doctors, as violence has increased in Mexico they have suffered the consequences of crimes like kidnappings, enforced disappearances and killings that have gone unpunished by authorities.
President Peña Nieto has introduced a number of radical measures, including 11 neoliberal structural reforms in education, health and the energy sector, during his first 20 months.
Tens of thousands of teachers have been protesting since May, demanding a meetings with Peña Nieto and his ministers to discuss the education reform. However Peña Nito and his education minister, Aurelio Nuño, have refused to talk with the union leaders.

In a joint communique, the National Indigenous Congress and the EZLN condemn the Mexican state's deadly violence in Oaxaca. 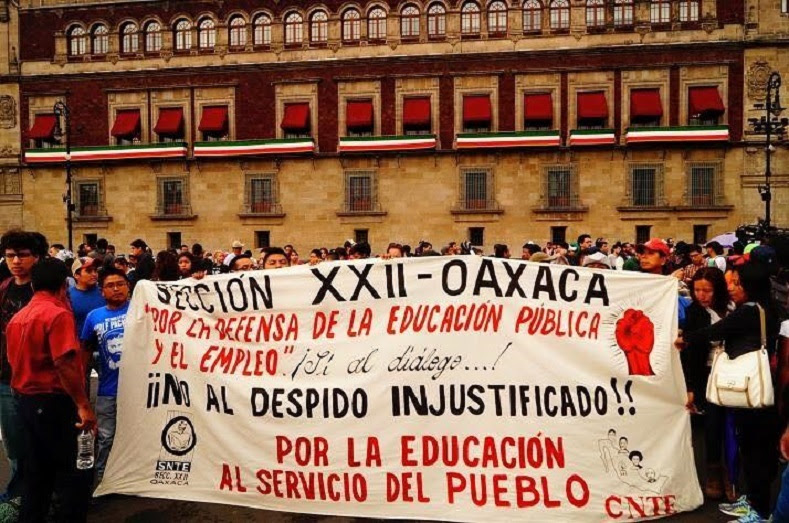 The National Indigenous Congress, CNI, and the Zapatista National Liberation Army, EZLN, condemned Monday the “cowardly police attack” against teachers affiliated with the CNTE union, and against the Indigenous community of Nochixtlan in Oaxaca, violence that left at least a dozen dead and dozens more injured.
"Faced with the cowardly repressive attack suffered by the teachers and the community in Nochixtlan, Oaxaca," the statement reads, teachers should know "that they are not alone, that we know that reason and truth are on their side, that the collective dignity from which they speak their resistance is unbreakable, and that this (is) the principal weapon of those of us below."
The statement condemns the state's "escalation of repression," including “unfair detention and now assassinations,” not just in Oaxaca, but in Chiapas, Guerrero and Michoacan.
The groups demand the state immediately release detained teachers and call for solidarity from civil society against the “neoliberal capitalist reform that they call 'education reform.'”
The state violence carried out against the protest, according to both social organizations, reflects the violence also carried out against Indigenous and rural communities.
“The ones who delight in power decided that education, health, Indigenous and campesinos territories, and even peace and security, are a commodity for whoever can afford them, and that rights are not rights but products and services that can be grabbed, stripped, destroyed, negotiated according to what big capital dictates."
Police were attempting to evict teachers from a road blockade on the Oaxaca-Puebla highway on June 19 in the municipality of Nochixtlan when gunfire erupted, leading to violent clashes that lasted approximately four hours.
Teachers from the dissident CNTE union, also known as Section 22, had set up the blockade as part of protests over an education reform implemented by President Enrique Peña Nieto and the arrest of several of the unions' leaders over the past week.
Peña Nieto unveiled an education reform in 2013 as part of a set of 11 neoliberal reforms implemented in his first 20 months of power.
The controversial law imposes teacher evaluations in order to determine which applicants will be chosen to fill open posts in the public school system nationwide. Critics say the testing only justifies mass layoffs and does not effectively measure teaching skills, like the special knowledge and demeanor needed to teach in rural areas and Indigenous communities.

PAME Condemns Oppression Against the Fighting Teachers of Mexico.

PAME that represents the class trade union movement of Greece expresses its solidarity to the fighting people of Mexico, we salute the mobilizations of the teachers of Mexico and we condemn the murders and oppression against the militant workers.
The antiworkers, anti-educational measures of the Mexican Government, aiming the further subjugation of education and the teachers under the logic of profits, of the markets, of exploitation, is the cause of the many day mobilizations of the teachers the last period. This policy wants the poor uneducated, and the teachers to become agitators of an unjust system of poverty and misery. Proof of the rottenness of the exploitative system are the murderous attacks of the Mexican Government against the workers who fight for their rights and the education of their children.
PAME condemns the oppression and the murders of militant workers. The class trade union movement of Greece expresses its solidarity with the workers of Mexico and the trade union organizations, members and friends of WFTU, who are at the frontline of the struggle.