KKE votes against Tsipras' government and the Prespes Agreement

In its bulletin on the political developments, the Press Bureau of the CC of the Communist Party of Greece (KKE) states the following:
“The bargaining of the previous days between Tsipras (SYRIZA) – Kammenos (ANEL) ended in a search for a vote of confidence in the Parliament. This is a development that suits both sides, as it provides the possibility, on the one hand for Mr. Tsipras to save his government, with votes from ANEL parliament members,  and on the other hand, allows  Mr. Kammenos to maintain his Parliamentary Group, appearing to stand up against a policy that he has supported throughout all of the previous period. 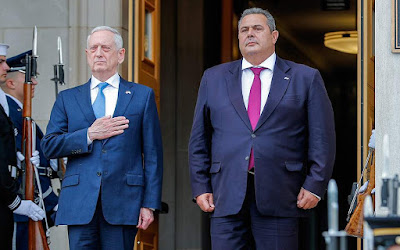 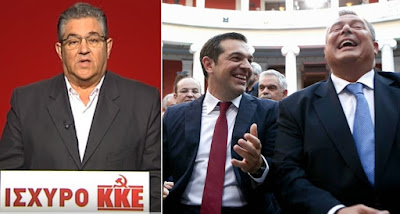 The islands of Kastelorizo, Ro and Stroggyli in south-eastern Aegean was the destination of a short visit by Greece's Minister of Defense Panos Kammenos, the Chief of the General Staff Admiral V.Apostolakis and 9 members of the Parliament's Committee on Foreign Affairs and Defense. Among the members who accompanied Kamenos were 5 MPs from SYRIZA, 1 MP from the right-wing ANEL (Independent Greeks) party, 1 MP from the Center Union party and 2 members from the Nazi-fascist Golden Dawn!
Read more »