“The government's celebrations can not hide that yesterday's Eurogroup agreement is essentially a post-memorandum Memorandum [of austerity]. The so-called "post-memorandum" period, not only will not be accompanied by substantial relief for the working-class strata but will involve new burdens. The huge budget surpluses, the rigid surveillance and approval of the process of "reforms" by the "institutions", the privatizations, the preservation of all antipeople measures in the Memorandums, and the completion of all those “remaining issues” reveal the true outcome of the agreement" points out the Communist Party of Greece (KKE) in a statement on the Eurogroup decision on Greek debt.


"The annex of the agreement describes in detail all the measures for which the Greek government is committed, completely crushing the legend about the "end of austerity" and a post-memorandum improvement in the lives of the workers", writes the Party statement, adding that "the agreement, which includes crush of pensions, reduction of tax-free allowances, reduction of health costs and social benefits, speeding up of auctions, minimum wage guaranteeing the competitiveness of monopolies, investments according to the needs of the capital, new liberalization of energy, acceleration of privatizations, demonstrates that capitalist development requires new sacrifices from the workers, cheap labor power and absolute freedom for the big capital to promote its investments."

The KKE notes that "these are measures that, over time, are required by the country's ruling class, as they expressed in the positions of SEV (Hellenic Federation of Enterprises), of SETE (Greek Tourism Confederation), the Union of Greek Shipowners, measures that the SYRIZA-ANEL government promotes with greater efficiency thus receiving multiple congratulations for its performance”, adding that “the outcome of the agreement shows that the Greek government's negotiation of the EFSF bond lengthening time and, more generally, of securing the sustainability of the sovereign debt, leads to a new deterioration".

"The sustainability of debt is based on the monstrous primary surpluses of 3.5% of GDP by 2022 and the 2.2% average surplus of the GDP by 2060, which the workers will be forced to pay" the KKE notes in its statement.

With regard to the government's negotiation of debt management, the KKE points out that “it referred to the "sharing of prey" between the domestic and the monopoly groups of the other European states and at the same time reflects the intra-EU contradictions which are constantly sharpening” 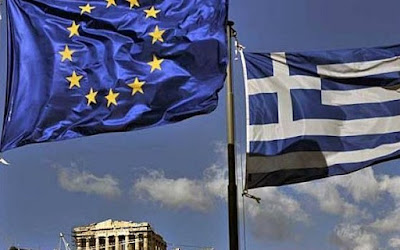 "The fiscal situation of the EU Member States, even those of the so-called powerful core, diverges, reflecting the exacerbation of asymmetries within the EU. Germany has surpluses, while Italy is plunged into a sovereign debt, the management of which becomes more difficult. In this context, the negotiation of the Greek debt is part of the overall negotiation for the management of the problem of capital's overaccumulation, the distribution of the losses of the crisis, and the profits of development between the EU Member States and, more generally, between Germany and the USA. Germany's tough line, the IMF's abstention from further lending and support towards France, portray these contradictions, contradictions that have not only been solved, but they are expanding" the KKE statement said.

"The KKE calls all workers, every man and woman from the popular strata who sees his life to crumble for the profits of monopolies, to stand up. To organize his counter-attack on the new agreement of the attack's escalation, to fight to recover the losses of the crisis, to demand the cover of his needs. To move decisively against the real opponent, the ruling class, the bourgeois governments, the bourgeois state, the EU and NATO. To align himself with the KKE and its forces for a radically different path of development that can meet its needs" the Communist Party of Greece's statement concludes.