Italian communist and workers' organizations: NO TO IMPERIALIST WAR — NO ALLA GUERRA IMPERIALISTA 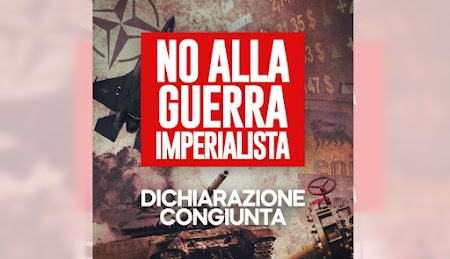 The following joint statement was adopted by Italian communist and internationalist organizations which participated at the national conference "The war in Ukraine, the economic crisis and the great world chaos. What to do?", held on 16 October in Rome.

"We, the communist, militant, worker and internationalist organizations, united in the national conference "The war in Ukraine, the economic crisis and the great world chaos. What to do?" held on 16 October in Rome, we call for maximum mobilization against the war and unitedly promote the following theses for collective debate:

The war being fought today in Ukraine between Russia and the Euro-Atlantic alliance is an imperialist conflict, which has its basis in the general crisis of the capitalist system on a global scale and, therefore, in a heightened competition between the major capitalist powers. We reject all ideological narratives that mystify the character of war and try to conceal its real nature in order to build consensus in favor of one or the other of the warring camps.

We denounce NATO's imperialist plans, its policy of expansion to the East and encirclement of Russia as co-responsible for the developments that led to the escalation of the war on Ukrainian territory. The toughest opposition to the imperialist strategies of NATO, the USA, the EU and the governments of the member states, with Italy as co-leader, is an integral and indispensable part of any real opposition to the war in our country.

We condemn the Russian military invasion, which, behind the alibi of the liberation of the Russian-speaking peoples of the Donbass and their legitimate aspiration to emancipate themselves from the oppression perpetrated by the Ukrainian nationalists, has been sowing death and destruction for months in the name of the interests of large Russian capital, in order not to defend the proletariat and the peoples of Russia and the Donbass, but the ambitions of the monopolistic bourgeoisie, of which the Russian government is an expression, to take an active part in a new partitioning of the world market.

We denounce the ultra-nationalist regime in Kiev, its dual role as a puppet of US imperialist aims in Eastern Europe and as a collaborator with NATO and the EU, which have endorsed the activities of openly fascist paramilitary organisations integrated into the Ukrainian state, its policies of repression and persecution of Russian-speaking populations, and its anti-communist persecution. We condemn the policies of large-scale privatization and social butchery against Ukrainian proletarians. Zelensky's nationalist government is not a mere bystander to the NATO-Russian confrontation, but is responsible for putting the territory of Ukraine at the disposal of NATO's war plans.

We stand in solidarity with the Ukrainian people, with the peoples of the Donbass, with the Russian people. We denounce the respective governments and all the forces co-responsible for the deaths and destruction that primarily affect the proletarians on both sides, cannon fodder largely forced to fight with the gun on their head of compulsory conscription and martial law.

We reject the ideological constructs used by all factions of the conflict to legitimize their policies. We reject the theory of the 'aggressor country' and the 'attacked country', which each power uses at its own convenience. We reject the hypocritical appeals to international law, which is daily violated and arbitrarily interpreted by all actors in the field. We denounce the instrumental use of principles and issues such as the 'defence of democracy', self-determination, the right to choose one's alliances, 'national security', human rights, and even anti-fascism, as demonstrated by the Russian Federation government's propaganda proclamations on the 'denazification' of Ukraine to justify its invasion. Against these ideological constructions made of lies, we revive the historical slogan of the workers' and communist movement: war on war, defeatism on both fronts!

No to rearmament policies. Not one base, not one soldier, not one euro for imperialist war. We denounce the rearmament policies of all NATO and EU member states, starting with the Draghi government's decision - endorsed by all parliamentary forces - to increase Italy's military spending by more than 30%, which follows the constant increase in military spending over the past decades. Every euro spent on war is taken away from health, education, and social policies.

The enemy is at home! Italy's arms race is functional both to the greater integration of Italy into NATO's war plans, but also and above all to the consolidation of the role, weight and specific interests of Italian imperialism. We reject the misleading theory that Italy is an "oppressed" and "non-sovereign" nation, which has always been used by Italian capitalists to legitimize their ambitions. The objectives of the Italian bourgeoisie, both when it raises the flag of Atlantic allegiance and when it pursues other plans, are incompatible with the aspirations and interests of the workers and the exploited. There are no common 'national interests' that would make any form of compromise of class forces with capitalist governments acceptable. We therefore reject any 'leftist' declination of the sovereignty perspective.

The bosses' war is paid for by the workers and the oppressed masses. The cost of the war today is being passed on entirely to the workers, the proletariat and the popular strata impoverished by the crisis. Italy's co-participation in the war and the policy of sanctions today has a direct and immediately perceptible impact on the lives of workers, the unemployed, intermittent workers, students, pensioners, much more than ever before in recent decades. It is not possible to oppose the high cost of living, high bills, price rises, inflation and speculation on essential goods and services, without questioning the warmongering policies of Italian governments and the EU on the issue of war, linking together the struggle for peace with the struggle against oppression, exploitation and starvation wages.

The bosses' war ravages the environment. Dust, rubble, polluted water, poisoned air are added to the devastation of the dispute over the search for the rare metals needed for the products of the so-called 'ecological transition', which is one of the guidelines of the capitalist restructuring desired by the big monopolies. The devastation of war adds to the environmental devastation and further aggravates it. The environmental question and the climate emergency, among the great issues of our time, just like the war, force us to think about an alternative society. Capitalism is unsustainable!

Counter the propaganda of war, reject the poison of nationalism. We denounce the climate of 'witch-hunting', the demonisation of every critical voice on the war and the policies of the Italian government, the complicity of the press, television, and media and communication apparatuses that have put their activities at the service of war propaganda since the 24th of February. We reject the rhetoric of 'national unity', already used during the pandemic emergency and re-proposed today, in the face of war, to ask the workers to get behind their exploiters and silently accept their war plans.

There is no such thing as 'peaceful capitalism'. We reject the theories of 'European security' and the 'multipolar world'. Developments in recent years confirm that war is intimately linked to capitalist development and the nature of this system. We reject all the theories that, from the "left", promise the illusion of a "peaceful" development of capitalism and international relations, or the possibility of transforming the very nature of transnational imperialist unions, which have also been supported by the forces of the Party of the European Left, advocating the strengthening of EU cooperation on "security" as an "alternative" to NATO. We reject the theories that use the buzzword of a 'peaceful multipolar world' to justify support for those new capitalist powers that are now pitted against the USA. The reality of the facts shows that the changing international power relations between capitalist states is a factor that not only does not guarantee peace, but on the contrary sharpens the competition and pushes it to a qualitatively more advanced terrain. The war in Ukraine is before our eyes to confirm this.

What is needed is class opposition to the imperialist war, starting with the workers and the exploited. Without this, the slogan of peace will be turned into an empty word, serving the interests of one of the capitalist factions in the field. We saw, last winter, peace demonstrations turn into interventionist demonstrations, calling for NATO intervention in Ukraine. We are familiar, on the opposite side, with the 'criticism' of the war in the name of 'national interests' made by those sectors of Italian capitalism that are more openly pro-Russian, thus defending the interests of their own wallets. These views do not question the predatory system that generates the war, but Italy's placement in one marauding faction rather than another. They are against this war, here and today, but in the name of the same 'national interests' they will be ready to support other wars tomorrow, because their narrative is the child of that same nationalism that pits peoples against each other and drags the workers to the tail of the bosses.

Let us build social mobilization against the imperialist war and against imperialism at home by placing ourselves in clear opposition to all the plans that are offloading the cost of the conflict onto the working class. We cannot allow that on the major issues that the war in Ukraine has brought, reactionary winds can be generated that use the issue of the high bills, or the contradictions that will explode even more in the coming months, as a flywheel for corporate interests. We call on all communist organizations to take the lead in the mass movements put in place by the social consequences of the war with a view to holding a classist center of gravity around the just demands they are making today.

We call for the construction of a great mobilisation against the imperialist war. Workers, unemployed, intermittent workers, students, Italians and of all nationalities must be the active protagonists of the struggle against the imperialist war. We want to build a path of struggle and mobilization that opposes any form of Italian involvement in the war in Ukraine, that fights against the imperialist plans of Italy and the Euro-Atlantic bloc, that opposes military spending, the sending of weapons, the policy of sanctions, the militarisation of Italian territory. We are fighting for the closure of all US and NATO bases, for Italy's exit from NATO and every transnational imperialist alliance, which we understand as an integral and indispensable part of the revolutionary struggle for a socialist society and workers' power, and not as a repositioning and reorientation of the foreign policy of capitalist Italy. We want to bring the voice of the workers and all the exploited back to the center, to make it break into a political debate in which we are always and only passive spectators, and to contribute, from an anti-capitalist perspective, to the development of a great anti-war mass movement.

As communists, militants, internationalists we will work with this spirit and these goals in every factory, warehouse, school, university, working-class neighborhood. In the immediate term, we support the initiatives promoted for the autumn by the class vanguards and conflictual trade unionism: the 22 October mobilization in Bologna; the demonstration in Naples on 5 November; the student mobilization day on 18 November; the general strike on 2 December; towards the construction of a large national demonstration in Rome against the war and the high cost of living on 3 December. 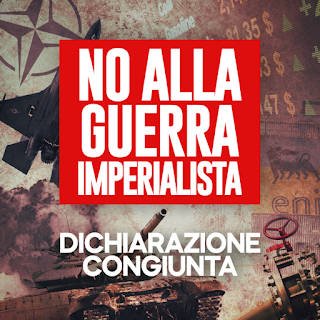