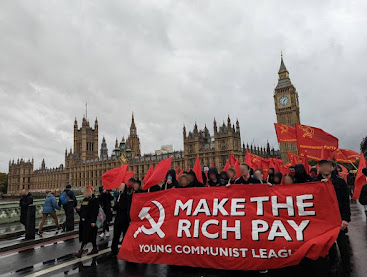 'The votes for strike action by members of PCS, the RCN - Britain’s fourth largest union - and the Education Institute of Scotland confirm that the strike spirit has spread beyond the industrial, transport and communications sectors', Alex Gordon told the Communist Party executive committee at the weekend.

'Hopefully, the current ballots by Unison in the NHS and the two main teachers' unions NEU and NASUWT will strengthen the determination of unions to coordinate strike action and collective bargaining strategies in order to bust the Tory pay freeze and secure a real cost of living increase for workers', he added.

Mr Gordon pointed to Chancellor Jeremy Hunt's Autumn Statement as evidence of the enormous attack being launched against people's living standards, democratic and employment rights and public services, with £60bn of new cuts in public spending planned from 2025 - after the next General Election.

Britain's Communists called for a 'united front' of working-class organisations and the left to challenge the ruling class offensive by the capitalist monopolies and their government. The CP will give full support to the development of an effective coordination committee of trade unionists able to link up their disparate disputes into united struggles.

Alex Gordon insisted that it was the common interest of the great mass of the population of our planet today to replace globalised finance capitalism by a socialist order of society.

This was demonstrated by the refusal of the US and other major capitalist powers at the COP27 summit in Sharm el-Sheikh to agree clear targets for rapid progress towards the elimination of fossil fuels.

'The EU proposal for a loss-and-damage fund are another attempt to wriggle out of the Paris Agreement commitments and to blame China for the failure of the rich developed countries to cut carbon emissions and cap global warming at 1.5 °C above pre-industrial levels', Mr Gordon commented.

At the COP15 Copenhagen summit in 2009, the developed countries had pledged $100bn in climate change aid to developing countries by 2020, but the undisclosed sum raised so far has fallen a long way short.

'All attempts to greenwash global finance capitalism have collapsed as US banks refuse to disinvest from fossil fuels - a contradiction that demonstrates the limits of capitalism and threatens the future of the planet', Mr Gordon concluded.

The CP executive committee also received reports from chair Ruth Styles and international secretary Kevan Nelson on the International Meeting of Communist and Workers Parties in Havana and from general secretary Robert Griffiths on his visits to Cuba and the congress of the Venezuelan Communist Party in Caracas.