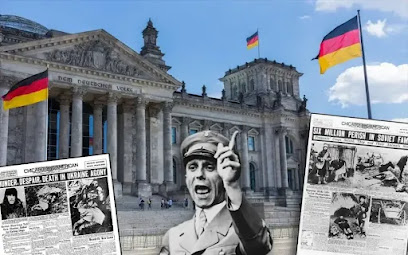 Here we go again! The filthy, old anti-communist falsehoods about the Ukrainian Famine, known as Holodomor, are back in the news.
This time, its the government of Germany that plans to recognize the Ukrainian Famine of 1932-33 as a "genocide" perpetrated by Joseph Stalin's leadership.

"German lawmakers have put forth a resolution to raise awareness of the 1932-1933 famine that led to the deaths of millions of Ukrainians as a result of Soviet leader Josef Stalin's policies", reads a recent article on "Deutsche Welle".

According to the report, German lawmakers are set to vote on a motion to recognize the death by starvation of millions of Ukrainians in 1932-33 as a genocide, German media outlets reported on Friday. The text of the resolution says the great famine of 1932-33, or Holodomor, ought to "join the list of inhumane crimes committed by totalitarian systems, in the course of which millions of human lives were wiped out in Europe, especially in the first half of the 20th century," the daily Frankfurter Allgemeine Zeitung reported.

Furthermore, Ukraine was hit hard by the drought of 1930-1932 while, at the same period, the country and the region of Southern Caucasus was plagued by a widespread typhus epidemic. In 1933, the Soviet government undertook emergency measures in order to ensure the successful harvest of the year, while food, agricultural machinery and specialized workers were sent to Ukraine to help the country recover from the famine.

One of the best works that have exposed the anti-communist conspiracy theory on the Ukrainian Famine is Douglas Tottle's 1987 book "Fraud Famine and Fascism" (click to download). Furthermore, a number of bourgeois historians and specialists on Russian history (e.g. Mark Tauger, R.W. Davies, St, Wheatcroft, etc) have challenged and debunked the false theory of "man-made famine".