Karl Marx statue unveiled next to Lenin in Germany's Gelsenkirchen 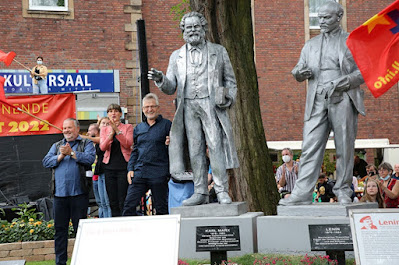 In June 2020, a 2-meter (6.5-foot) statue of Vladimir Lenin had been unveiled at the headquarters of the Marxist-Leninist Party of Germany (MLPD) in Gelsenkirchen. But, what is better than a statue of Lenin? Answer: Two statues, one of Lenin and one of Marx.

Yesterday, August 27, a 2.1-meter aluminum statue of Karl Marx took its position next to Lenin's. Approximately 1,200 people gathered outside the MLPD headquarters to attend the event for the monument's presentation.

According to the Party, the custom-made Marx statue cost $50,000 to make and install and was funded through donations. The initiative gains special significance in a period when reactionary governments in the Baltic countries proceed to the shameful dismantling of Soviet-era memorials, using as a pretext Putin's war in Ukraine.

It is reminded that back in 2020, the MLPD had to overcome multiple obstacles before the installation of the statue, as the local council attempted to block the process.